Published by Emma Lee-Potter in on Sunday 12th June 2016 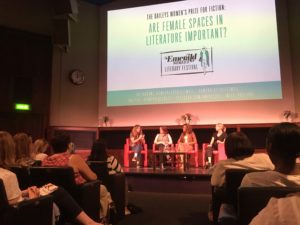 Like everyone else I know, I’m deluged with emails, newsletters and press releases from dawn till dusk. But there’s one that arrives at around noon each day that I always look forward to reading.

I’m such a fan that as soon as I spotted that Emerald Street was running its first literary festival I signed up on the spot. It proved to be a great decision, partly because it was at the Royal Geographical Society in Kensington Gore (a lovely building), partly because the line-up of speakers was ultra-inspiring and partly because there was time in between events to sit in a stylish marquee decked with leather sofas, country tables and posies of flowers in jam jars, sip a glass of Aperol and chat to my friend Liz.

But the events were the key attraction and in true Emerald Street style they were original, inspiring, funny and entertaining. A day’s ticket gave us a pass to attend three talks and workshops so here are my choices.

First up was a talk chaired by Baileys Women’s Prize co-founder and bestselling novelist Kate Mosse. The winner of this year’s Baileys Prize – the brilliant Lisa McInerney – had been announced three days earlier and McInerney was on the panel, along with two of the shortlisted writers, Cynthia Bond and Elizabeth McKenzie. They talked about everything from their writing backgrounds (McInerney started by writing a blog, McKenzie edited magazines and social worker Bond used to start writing at 5.30am each day) to whether female spaces in literature are important. Answers on a postcard please.

Next came a talk entitled Writing about the Dark Times, where writers Amy Liptrot and Bryony Gordon discussed their memoirs about addiction and recovery. Gordon’s new book, Mad Girl, is a brave and frank book about OCD, depression and bulimia while Liptrot’s, The Outrun, details her alcohol addiction and subsequent redemption on the Orkney Islands, where she grew up. I want to read them both.

Last but not least came Maggie O’Farrell, whose seventh novel, This Must Be The Place, has just been published. As is often the case at literary events, the audience’s questions were every bit as fascinating as the interviewer’s so here are a few details that emerged. Asked what she would have told her younger writing self O’Farrell said” “Keep going. Don’t worry too much about the beginning. I’ve often found my first line a third of the way into the book.” She always writes “a lot of drafts” and after a while “the book starts to get its own pulse, its own momentum.” She never shows her work to anyone until she’s finished, but her husband, novelist William Sutcliffe, is her first reader. “I write the first draft in a bubble,” she said. “It’s like walking into a blizzard. You never know what is there.”