Published by Emma Lee-Potter in on Saturday 6th February 2016 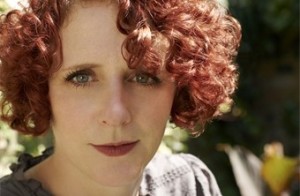 Maggie O’Farrell is one of my favourite authors. She always has been – ever since I picked up a copy of After You’d Gone, her first novel, and didn’t put it down till I’d finished it at three in the morning. So when the Headline team announced it was holding a Rooftop Book Club event to promote O’Farrell’s forthcoming novel This Must be the Place I booked a couple of tickets like a shot. I wasn’t the only one. When I arrived at Hachette’s riverside HQ with my daughter the place was packed with O’Farrell fans.

The evening kicked off with writer Hannah Beckerman interviewing the US novelist Monica Wood, whose novel, The One-in-a-Million Boy is out in April. Then it was O’Farrell’s turn to take the spotlight and much to her fans’ delight she started with a reading from This Must be the Place. It’s sometimes difficult to get an impression of a novel from a few pages but judging by what we heard her new novel is going to be every bit as compelling as the previous six. Hannah Beckerman, who’s already read it, went so far as to call it “your best book yet.”

Whereas Instructions for a Heatwave, O’Farrell’s previous book, largely took place in one house and had four main characters, This Must be the Place has multiple locations and time zones.

Just to give a flavour, this is what the blurb says. “Meet Daniel Sullivan, a man with a complicated life. A New Yorker living in the wilds of Ireland, he has children he never sees in California, a father he loathes in Brooklyn and a wife, Claudette, who is a reclusive ex-film star given to shooting at anyone who ventures up their driveway.”

“My main urge was to rip up the rule book and start again,” said O’Farrell, tall and striking with a shock of red curls and a ready smile. “I wanted to get away from what I had done before and start something new – start again and really enjoy it. It felt a bit like removing a corset – not that I ever wear one.”

Beckerman asked O’Farrell about her writing technique. “You aren’t a plotter or a big planner. How do you write a book this complex? How did you keep the story in your head?”

O’Farrell revealed that her house was undergoing building work while she was writing This Must be the Place and she wrote in “a corner this big” (she stretched her arms out to indicate an area the size of a cardboard box). She used a pinboard with “very complicated Post-its” on it but came a cropper when her youngest daughter, who was two at the time, presented her with a screwed ball of paper and announced “all gone.” O’Farrell was about halfway through the novel by this time and though she admitted it was “a bad day” added calmly: “You learn from it.”

Beckerman asked O’Farrell, who has three children between the ages of three and 12, about a comment she once made about having become a better writer as a parent.

O’Farrell nodded. While she has “less time and less head space,” in recent years she has focused on her writing during two half days a week, plus evenings. “If you want to do it you will do it,” she said. “You will find a way to do it.”

At the end of the evening the audience was invited to ask questions and loads of arms flew up. Interestingly, O’Farrell revealed that she’s not hung up on writing genres. “As a writer your job is to write and how people classify your books isn’t something I engage with,” she said. “I just concentrate on what I want to write.” She also spoke about having “a really bad stammer” as a child, loathing the telephone, not using Twitter and the fact that she and her writer husband “are each other’s first readers.”

A woman in the audience asked about advice for new writers and she replied: “Keep going. Plug away. Redraft and redraft until you are sick of the sight of it.”

This Must be the Place by Maggie O’Farrell is out in May.