Book review: All at Sea by Decca Aitkenhead

Published by Emma Lee-Potter in on Friday 15th April 2016 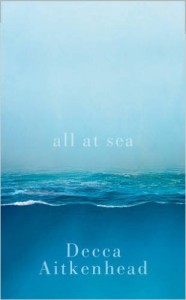 “On a hot still morning on a beautiful beach in Jamaica, Decca Aitkenhead’s life changed for ever.”

So runs the blurb for All at Sea, Decca Aitkenhead’s haunting memoir about her late partner Tony Wilkinson. This remarkable book recounts his early life (he was adopted by a white couple and grew up in Leeds) and his transformation from a dreadlocked criminal with a history of drug dealing and violence to a much-loved youth worker. He was on holiday in Jamaica with Decca and their two children in 2014 when their four-year-old son was swept into the sea by a huge wave. Tony swam out to save him – and drowned in front of Decca’s eyes.

Now Decca, an award-winning Guardian journalist, has written their story and it’s the most exceptional book I’ve read this year. Why? Because it’s poignant, wise and beautifully written. It brings Tony Wilkinson – a “tall, gregarious, good-looking mixed-race man with dreadlocks who was always out on the pavement and seemed to know everyone” – so stunningly to life that you feel you’ve actually met him.

All at Sea relates how Decca and Tony met as neighbours in Hackney. They each left their partners and moved in together. Tony applied to Westminster University to study psychology and criminology, got a first and started working for Kids Company.

By the time of Tony’s death he and Decca had two small sons, two full-time jobs and were busy renovating a 16th century farmhouse in the wilds of the Kent countryside. After “an interminable winter of dust and rubble” they decided to take a two-week holiday at Treasure Beach in Jamaica, one of Decca’s favourite places in the world, and in the space of a few minutes the family was plunged into tragedy.

Honest, moving and at times funny and uplifting, All at Sea is so multi-faceted that it’s hard to do justice to it in a short review. All I can do is urge you to read it.