Published by Emma Lee-Potter in on Tuesday 11th May 2021 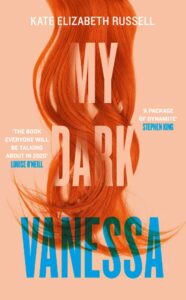 My Dark Vanessa is one of the most harrowing novels I’ve read in a long time.

The story of an abusive relationship between a 15-year-old girl and her teacher, it’s dark and disturbing, yet utterly compelling.

Once you’ve read it you won’t be able to forget it.

Vanessa Wye is an immature, awkward pupil at a US boarding school when her English teacher, Jacob Strane, starts to take an unsettling interest in her. Before long he is touching her thigh under the desk and smuggling her out of school at night to have sex.

The narrative shifts back and forth between 2000, when the abuse starts, and 2017, when Vanessa is in her early 30s and still in an on-off relationship with the appalling Strane.

When she discovers he’s been accused of sexual abuse by another student, Vanessa is stunned – because she genuinely believes that her relationship with him wasn’t abuse. It was love. It’s only as she examines the past that she realises that she’s a victim herself.

This important and timely book, written by debut author Kate Elizabeth Russell in the wake of the #MeToo movement, is dedicated to those “whose stories have not yet been heard, believed or understood”. It has been shortlisted for this year’s Swansea University Dylan Thomas Prize, which is awarded for the best published literary work in the English language by an author aged 39 or under.

PS. Thank you very much to Bei Guo of Midas PR for inviting me to take part in the @dylanthomprize tour.