Published by Emma Lee-Potter in on Thursday 31st December 2020 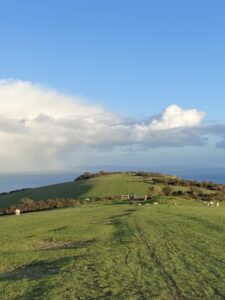 I started writing my blog in 2011 and I’ve never had such a long gap between posts before.

But even though I’ve written thousands of journalistic words this year I couldn’t bring myself to post a blog.

It seemed inconsequential and pointless during the pandemic and anyway, it always got banished to the bottom of the to-do list, along with paperwork, tidying up my office and sorting out the massive pile of books scattered across the floor.

But now it’s the last day of the year and time to bid farewell to 2020. Good riddance to bad rubbish was my first thought, after a year when more than 70,000 have died from coronavirus, hundreds of thousands have lost their jobs, children have missed months of school and so many people have suffered grief, bereavement and loss.

I’ve been lucky to be tucked away in seaside Dorset, far from the madding crowd as Thomas Hardy so eloquently put it. Just before the first lockdown my daughter moved home and spent four months working in the dining room, which was the biggest treat I could possibly imagine. She was a whirlwind of energy. Alongside her day job she decorated two bedrooms and the landing, cooked wholesome vegetarian meals (my husband lost half a stone in the process) and went running at the crack of dawn. I burst into tears when she headed back to London in July.

Three other things kept me going through 2020 – Zoom drinks with my son and his girlfriend on Saturday nights, the stunning Dorset coastline and large quantities of books.

I’ve always loved walks but never more so than this year. The highlight of every afternoon was putting on my sturdy walking boots and striding along the clifftop to Anvil Point or hiking up Ballard Down (left), the headland between Studland Bay to the north and Swanage Bay to the south. We’ve walked it in all weathers and it never fails to capitivate me. When you get to the top you can see as far as the Isle of Wight in one direction and across Poole Harbour in the other. It’s simply magical and more often than not you don’t see a soul up there.

Books have been my other joy. I reckon I’ve read about 100 this year and these, in no particular order, are my favourites: Shuggie Bain by Douglas Stuart, The Girl With The Louding Voice by Abi Dare, Saving Missy by Beth Morrey, The Silent Treatment by Abbie Greaves, Small Pleasures by Clare Chambers, Remain Silent by Susie Steiner, Strange Flowers by Donal Ryan and The Lying Life of Adults by Elena Ferrante.

New Year’s Eve is going to be a quiet one this year but Happy New Year to everyone and despite the grim news about the second wave here’s hoping that 2021 brings much better news all round.