How I came to buy the house with no name

Published by Emma Lee-Potter in on Thursday 21st April 2011 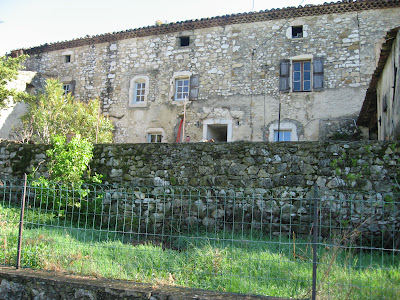 Sitting in Oxford, with the number 7 bus trundling past and Marks & Spencer just up the road, I sometimes think the house with no name must be a figment of my imagination. Am I going to wake up one day and discover that the tumbledown French farmhouse that inspired this blog was just a dream?

Definitely not. It all looked splendidly real when we sat in the courtyard in the scorching sun last week, drinking Clairette de Die, the local sparkling white wine, and admiring how far the renovation process has come.

When I first clapped eyes on it, the place was a wreck. But two things convinced me to throw caution to the wind and buy it. One was the terrace, where generations of farmers had sat under the old plane tree and put the world to rights over a glass or two of pastis. The other was a pretty sunlit field, bordered at one end by a coppice of distinguished-looking oak trees. I could just imagine long summer lunches there, with my daughter reading and my son whizzing about on his mountain bike.

Now the builders have worked wonders, ripping out the hardwood partitions that divided many of the rooms and replacing the dodgy floors and ceilings. I only wish I’d been there when one of them stopped everyone in their tracks by walking jauntily across the joists like the tightrope walker he used to be.

The adjoining barn has been utterly transformed too. Once full of discarded car doors, rusty bits of tractor and several lifetimes of junk, it now boasts two floors and a state-of-the art new roof which cost nearly as much as the house itself. The vast first floor is so breathtaking that we’re all arguing about what it should be used for. It’s the size of a tennis court and I’m secretly harbouring plans to make it my office.

Both my children have been involved in the project right from the start, from the day I signed the compromis de vente at the lawyer’s office to rolling up their sleeves and helping with heavy-duty building work. Two years ago, in blistering heat, my daughter painted the huge gates that open into the courtyard a tasteful shade of pale grey. She liked the colour so much she persuaded the builders to paint the beams inside the house the same hue. Meanwhile my son’s triumphs include demolishing an entire first-floor ceiling. It wasn’t the ideal convalescence for someone who’d recently broken his collar bone in three places, but he was adamant he wanted to do his bit.

PS: Several readers have asked whereabouts in France the house with no name actually is. It’s a tricky one because when I say it’s in the Drôme most people look blank. Even Anne-Marie, our sophisticated Parisian friend, didn’t know it. So, just to clarify. The Drôme is north of Provence, west of the Alps and east of the busy route de soleil that runs from Paris to the Côte d’Azur. The countryside is lush and green, with small farms, olive groves and majestic crags that tower over the landscape. A bit like Provence crossed with the Lake District in fact.