Published by Emma Lee-Potter in on Wednesday 11th October 2017 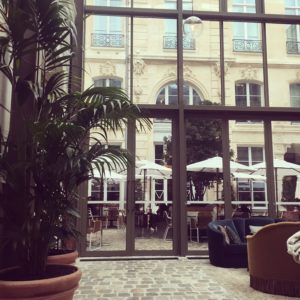 Forget Paris in the springtime. Paris in the autumn is far more fun – especially when it gives you the chance to stay at the latest addition to the Hoxton fold.

The Hoxton Paris is less than a mile from the Gare du Nord, a half-hour walk if you’re trailing a suitcase on wheels. So after getting the first Eurostar out of London on a dreary Tuesday morning we were sitting in the Hoxton Paris ordering coffee by 9.30am.

“Have you ever stayed at a Hoxton hotel before?” asked the ultra charming receptionist in impeccable English. “Yes, all of them,” I replied, feeling like a superfan. She looked slightly surprised but pleased to hear I’m a devotee of their Shoreditch, Holborn and Amsterdam outposts (and yes, I’ve got the soon-to-be opened Williamsburg branch in my sights).

The Hoxton Paris is just as stylish as its siblings, perhaps more so. The largest Hoxton yet, it boasts 172 rooms spread across four floors of an elegant 18th century mansion. There are two courtyards, perfect for drinks in the evening, a chic restaurant, an upstairs bar and a vast atrium where beautiful people while away the morning. Paris Fashion Week was coming to an end when we visited and the hotel was full of fashionistas and bloggers posing for pictures and poring over their laptops. They made me feel slightly ancient but I pulled myself together and tried not to think about it.

I was in Paris with my daughter, who had a week off before starting an exciting new job, so we revisited many of our favourite haunts. They included the historic Rue Montorgeuil, a vibrant street in the 1st arrondissement, where we used to buy croissants when she was a baby, the 6th arrondissement, where she lived during her Erasmus year abroad, and the Boulevard St Germain, my stamping ground back in the days when I worked as a very shambolic au pair. My daughter bought some plates for her new flat from Merci (forever dubbed the “do I really need it?” shop by my son and I bought a tiny rose choux bun from the best bakery in the world, Popelini.

We also visited the David Hockney retrospective at the Centre Pompidou. We both missed it when it was in London so jumped at the chance to catch it in Paris, ignoring the fact that it was slightly surreal to be gazing at Yorkshire landscapes and Californian swimming pools on an October day in France.

We spoke lots of French, drank lots of wine and even learned how perfume is made during a visit to the Grand Musée du Parfum.

It was a heavenly three days and I’m determined to return to the Hoxton Paris as soon as possible. I have a feeling that it will be booked solid if I don’t get cracking.