Published by Emma Lee-Potter in on Saturday 1st September 2018 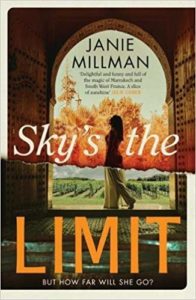 Janie Millman and her husband Michael Wilson are two of the most life-enhancing people I know. I met them when Janie spoke about her sparkling first novel, Life’s a Drag, at the Purbeck Literary Festival two years ago and they were brilliant company. They regaled us with the story of how they’d bought an 18th century townhouse in south west France on a complete whim after spotting a picture in a discarded newspaper. “We had no more idea of moving to France than moving to the moon,” she says. “We were actors and our DIY skills consisted of a couple of B&Q commercials – but somehow we got it done and in 2010 Chez Castillon was born.”

Janie and Mickey now run creative workshops, courses and retreats at the divine-looking Chez Castillon. My writer friends love the place so much that they book year after year, entranced by the setting, the opportunity to write in peace and Janie and Mickey’s effervescent company. As AJ Pearce, the author of the bestselling Dear Mrs Bird, says: “I wrote 15,000 words in five days (loads for me) and left feeling totally rested and relaxed.”

Goodness knows how Janie finds time to write novels too but her second book, Sky’s the Limit, has just been published and it’s a winner. Set in France and Marrakech, it’s funny and insightful and captures both places so vividly that I wanted to leap on a plane and head straight to Morocco. The book’s star is Sky, a talented artist who is stunned when her husband reveals he has fallen in love with Nick, her oldest friend. Desperate to get away from the pair of them, she decides to book a holiday in Marrakech. Once there, she meets a host of intriguing characters, from single mother Gail, who’s trying to find the father of her child, to Beatrice, the generous-hearted owner of the riad where Sky and Gail stay. The riad entranced me so much that I immediately started researching trips to Marrakech, keen to discover “the souks, the spices, the market acrobats, the magicians and storytellers” Janie describes.

Janie is brilliant at evoking place and atmosphere but she’s equally good at writing about misunderstandings, emotions and messy lives. Best of all, she creates likeable characters – apart from the odious Celine, who neglects her adorable young daughter and loathes virtually everyone she meets – and by the end I was rooting for them all. Actually, they were so real in my mind that I’d love Janie to write a follow up. Without giving anything away, I want to know what happened to Sky and Gail next.