Bike fever at House With No Name

Published by Emma Lee-Potter in on Tuesday 24th July 2012 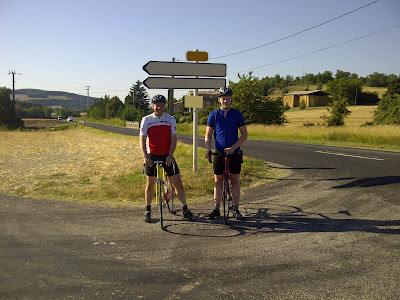 Bike fever has hit House With No Name with a vengeance. The bike rack on the car grows more sophisticated by the day, the house is full of giant tubs of carbohydrate protein and my son’s bought a bike computer that maps everything from time and speed to altitude and heart rate.

But most surprising of all is that his obsession is catching. His dad took him to Oxford’s brilliant Beeline Bicycles to buy a puncture repair kit and came home with a ton of cycling gear. For himself. Next, my daughter declared she was going to cycle to the boulangerie every morning to buy croissants so her bike was duly strapped to the roof too.

A few days later they all embarked on their first bike ride together. First up was a speedy lesson on bike cleats, then they were off. Actually they had to walk the first bit of the way, terrified that the weed-infested bumpy track might damage their precious tyres. The next-door neighbours looked stunned at the sight of les Anglais trooping down to the road in their garish Lycra and bike helmets.

My husband and daughter sensibly chose shorter routes but my son returned two and a half hours later, dripping in sweat and beaming. He’d done a round trip over the hills, cycled up a mountain my old 2CV would struggle with and got back just in time for a carb-loaded supper.