The happiest place in the UK

Published by Emma Lee-Potter in on Monday 17th August 2015 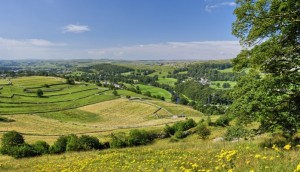 Another day, another survey – only this time round I reckon that researchers have got it just about right.

A new study by estate agents Hamptons International declares that if you want to combine affordable living with high levels of happiness then Allerdale in Cumbria, which covers the area around Keswick, is the place to go. Close behind in the happiness and affordability stakes is the Ribble Valley in Lancashire – and that’s where I’d move like a shot if I could live anywhere at all. I’m in good company too. Apparently the Queen once admitted in an unguarded moment that she might like to retire there.

I was lucky enough to live in the Ribble Valley for three glorious years. My daughter started school there and my son was born in nearby Blackburn. In fact I’m sure that the gallons of fresh air he breathed in as a baby gave him his hardy disposition and lifelong love of outdoor pursuits. He sometimes gazes at pictures of the remote farmhouse we rented on the edge of Pendle Hill with nostalgia, wishing he still had a perpendicular slope to race down on his bike.

If you’ve never been there, it’s astonishing quite how unspoilt and unknown the Ribble Valley is. Lots of people have never even heard of it but the village where we lived had everything you could ask for – a pub, church (where my son was christened on a windy June afternoon), post office, stream, nursery school, glorious walks and the friendliest people I’ve ever met.

But even though we were out in the wilds I didn’t feel cut off from the outside world (well apart from when my husband was away and I got snowed in for three days with two tiny children). Manchester was only an hour’s drive away, which meant I could study for an MA in novel writing at the University of Manchester, attend lectures and talk about books with the likes of Sophie Hannah and Sam Bain. And yes, they were both as brilliant in their twenties as they are now.