Published by Emma Lee-Potter in on Thursday 28th December 2017 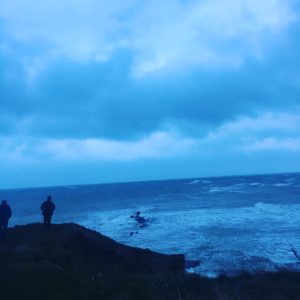 “All good wishes for a peaceful Christmas. Stay safe in 2018 in this strange and troubled world.”

That’s what my wise Evening Standard friend David M wrote in his Christmas card and I couldn’t have put it better myself.

What an unsettling year 2017 has been. On a personal level there have been highs and lows. The highs included bursting with pride when I saw my son graduate in July, celebrating when my daughter passed her ACA exams and feeling very honoured to be shortlisted for the outstanding schools journalist of the year award. The low was my mother-in-law’s death after a long struggle with Alzheimer’s in April. On a wider level 2017 has been an annus horribilis as the Queen would put it – a difficult year punctuated by tragedy and conflict around the world.

But now the year is drawing to a close and it’s time to look forward, not back. Here in Dorset we’re enjoying the quiet post-Christmas days. Our festive sojourn is over, we’ve enjoyed lots of blustery seaside walks (see above) and many of us are back at work again. We’ve finished most of the Christmas food – apart from vast quantities of mince pies, which I completely miscalculated. The first evening my son was home we got through a whole packet so speedily that I decided we needed extra supplies. I rushed out and bought two more packs in Waitrose while my husband bought three more packs in Marks & Spencer. Sure enough, no one could face a single mince pie over the whole of Christmas and we’ve now got 30 going spare. If anyone’s got any suggestions do let me know.

This is the time of year when newspapers fill their pages with memorable events and pictures from the last 12 months. Radio and TV get in on the act too – but not always in a good way. As my daughter and I drove to the shops today (mince pies were NOT on the list) we listened to Jeremy Vine’s lunchtime slot on Radio Two. Far from filling us with festive cheer and bonhomie, his round-up of memorable moments from his show in 2017 ranged from a shouty exchange about Gibraltar to the grisly tales of listeners and their dead pets. When he related the story of a woman who keeps her dead canaries incarcerated in little boxes in the freezer because she can’t bear to throw them away we had to turn the radio off altogether.

As January 1 approaches I’m mulling over my New Year’s resolutions. One thing I won’t be doing is emulating an acquaintance who writes his resolutions in the back of his diary at the start of the year. On December 31 he re-reads them, checking which ones he’s kept and which ones he hasn’t. I reckon it’s more uplifting to start the New Year in a positive frame of mind so on that note I hope everyone has a wonderful New Year’s Eve and a happy, healthy, fun 2018.