Published by Emma Lee-Potter in on Friday 21st December 2018 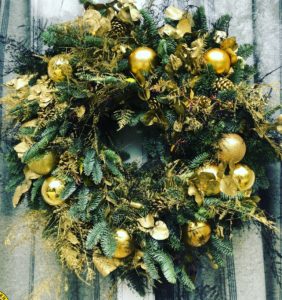 The Christmas tree is up, festooned with decorations and, thanks to our wonky wooden floor, leaning at a jaunty angle.

One of my favourite moments of the festive season is opening the cupboard under the stairs and hauling out the dusty ragbag of baubles, hearts, stars and angels we’ve collected over the years. They all have their own history, from the glittery heart my daughter’s teacher Annie gave her in year 5 to the giant papier-mache baubles bought from Habitat many moons ago.

I think – note the word think – I’ve finished my Christmas shopping but I’m stressing about the food big time, uncertain when to brave the supermarket mayhem. Luckily I’ve got my children to keep me on the straight and narrow. My daughter has created an ingenious spreadsheet entitled Christmas Planning, with everything we need to buy carefully listed, and my son has valiantly promised to sort out the turkey giblets (we are very squeamish in our house so as far as I’m concerned his promise is verging on the heroic).

Christmas is definitely a work in progress so all I can say at this juncture is a big thank you for reading my blog in 2018. Have a wonderful, peaceful and very happy Christmas and New Year – and see you in 2019.

I never thought I’d say this but I’ve fallen out of love with the Sandbanks Ferry.

The chain ferry clanks back and forth between Sandbanks and Studland three times an hour and means that instead of having to drive 25 miles round Poole Harbour we can drive on to the ferry at Shell Bay, gaze at the wondrous seaside views for five minutes and drive off at Sandbanks.

Except… for the last seven and a half weeks we haven’t been able to. The ferry has been out of action, undergoing its two-yearly refit in Falmouth, and we’ve been bereft. My husband’s been getting up at five-thirty each morning to get to work on time and even though the ferry crew promised the refit would take four to six weeks it’s been far longer. But today – at long last – a solitary tweet announced that the ferry would be back at lunchtime. My husband was so excited he almost danced a jig in the kitchen. “No more driving round and an extra thirty minutes sleep,” he crowed. “It’s like an early Christmas present.”

In amongst the Christmas chaos I’ve managed to read two brilliant new books.

I was lucky enough to be sent an advance copy of Jane Harper’s brand new novel – and it’s a cracker. Out in February 2019, The Lost Man is the compelling story of three brothers living in the wilds of the Australian outback. I loved Jane Harper’s first two novels, The Dry and Force of Nature, but this one is even better. It’s going to be huge.

The other book I galloped through was the first part of Karen Wheeler’s Dream Cottage – Four Seasons in Devon by the Sea.

I’ve been a fan of the former fashion editor’s writing for ages, ever since she hung up her high heels, moved to a village in rural France and wrote a series of books about her new life. Now she’s moved to a seaside cottage in East Devon and has written a four-part serial about it. I downloaded the first part when Karen announced it on Twitter and I was gripped. It tells the story of how she came to buy the cottage, the shock in store for her on the day of exchange, her challenging childhood and her difficult relationship with her mother. The next instalment is out on January 1 and I can’t wait. What a treat for New Year’s Day.