Published by Emma Lee-Potter in on Thursday 1st March 2012 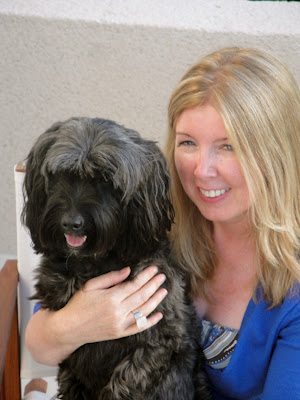 Whenever I worry about my whirlwind decision to buy the House With No Name, my run-down farmhouse in the south of France, I quickly turn to my growing library of books by other people who’ve done pretty much the same thing. My absolute favourites are the three books that former fashion editor Karen Wheeler has written abouthanging up her high heels and moving to a small village in rural Poitou-Charentes. The first two are Tout Sweet: Hanging up my High Heels for A New Life in France and Toute Allure: Falling in Love in Rural France, and the third, Tout Soul: The Pursuit of Happiness in Rural France is out next week.

There’ll be a review of Tout Soul on tomorrow’s Friday Book Review, but in the meantime Karen kindly agreed to answer some questions from House With No Name.

Why did you decide to move to France – and when? Did you ever consider moving to a city or did you want to be in rural France?

Karen: It was a random series of events that led me there, all described in my first book Tout Sweet: Hanging up my High Heels for a New Life in France. I would never have considered moving to a city, as I’d lived in London for most of my life, and as cities go, it’s a pretty hard one to beat. I wanted countryside, fields and unspoilt countryside at my door. And I wanted that whole rustic French vibe: red and white checked tablecloths, jasmine and hollyhocks, and logs piled up in wicker baskets by the fire.

It sounds really tough to leave friends in London and make a totally new life in a different country. What advice would you give to anyone contemplating moving to France?

Karen: For me, it wasn’t a tough decision at all. Instead, it felt like an amazing opportunity had dropped out of the sky. My advice would be to move somewhere that is within walking or cycling distance of a village, rather than a remote hamlet. And don’t move there if you’re doing so in order to save your marriage. It’s surprising how many couples do, only for their relationship to go into meltdown shortly after arrival.

How good was your French when you arrived – and are you fluent now?

Karen: It was passable – I had A level French and for my history degree (admittedly a long time ago) I worked a lot with original documents from the French Revolution, so I could read it fluently. Conversation wise, there is definitely room for improvement, especially when I’m cross, which is usually with France Telecom. Then words often fail me.

When I’m in France the main things I miss are Earl Grey tea bags and M&S. What do you miss most about the UK?

Karen: Apart from friends, M&S food hall is the number one thing that I miss. Someone once said that eating out in rural France is a lesson in repeated heartbreak. Cheese and wine aside, I would say the same about French supermarkets: harmful additives and hydrogenated fats are shockingly prevalent.

And what are the best things about living in France? Best food, drink, way of life?

Karen: For me it is the beauty of the Poitevin countryside. The Poitou-Charentes is a very under-rated area of France with some stunning walks and cycle rides. My favourite thing is cycling through dilapidated hamlets and old villages at sundown on a summer evening, with Biff (Karen’s dog) running along by my bike.

Your village sounds heavenly. Is it really called Villiers – and have you given your French friends different names? How have they all reacted to the books?

Karen: I changed the name of my village and also the names of my friends – with the exception of Luis. The overwhelming response to the books has been positive; and my friends have been very generous in letting me write about events in their lives. That said, I do hold back on a lot of stuff and I try to focus on peoples’ most endearing traits. One day I might write the unexpurgated version! For me, real life is much more interesting than fiction. There are some wonderful characters hiding out in the French countryside.

Your new book tackles a heartbreaking time in your life. I don’t want to give the story away but was it a tough decision to write about your love life and innermost thoughts?

Karen: Yes, I wasn’t sure that I wanted to write this book at all. The most common piece of reader feedback I’ve had about first two books is that they are very uplifting and “better than anti-depressants” but Tout Soul covers some very sad territory. Writing it has been a form of therapy for me. It’s weird but when I write my books, I do them for myself first and foremost – creating the sort of book that I would like to read. It’s only when they are published and out in the word that I panic and think: “God, do I really want people to know that about me?”

I’m actually a bit mortified when I think about the stuff that I’ve revealed in Tout Soul – some of it really quite embarrassing in the cold light of publication day. But I wrote it with my heart rather than my head (had my head been in charge I probably wouldn’t have written it at all).

A friend who works in the book world read it very early on and said that I come across as a bit mad in places. But I recently read A Year of Magical Thinking by Joan Didion, in which she meticulously picks apart the process of grieving, following her husband’s death. As Didion points out, “The power of grief to derange the mind has been exhaustively noted.” I could relate to so much of what Didion describes in her book and I think that many of my readers will be able to relate to the emotions described in Tout Soul – particularly the feelings of loss, guilt and regret.

The book was also written for someone who made a lasting impression on my life. And despite the sad events, the ultimate message is, I hope, an uplifting one: that life is the most amazing privilege.

Will there be more books in the series? Note from me: Please say yes!

Karen: I kept telling myself that Tout Soul would be the last – that I can’t go on writing about my life forever – but then something really funny happens or I meet a really interesting character and I think “Just one more book!” Plus, I really enjoy writing the books. I feel like I’ve found the thing that I was meant to do.

So yes, I’m about to start work on the fourth in the series, to be published next year, called Sweet Encore. (Unfortunately, I’ve run out of plays on the word “Tout”.) I can’t reveal the subtitle yet, as I don’t want to give too much away. This book is going to be a bit of a surprise. And after that, who knows?

Is your dog, Biff, as adorable as he sounds and looks?

Karen: YES – probably even more so in real life. He’s a very charismatic little dog – fun, fearless and affectionate. He charms everyone that he meets, apart from the local cats. I’m completely besotted with him.

Karen’s latest book, Tout Soul: The Pursuit of Happiness in Rural France, is available for download now, from Amazon. The print version will be launched on March 7 at £10.99, and to coincide with the launch, the e-book version of Karen’s first book, Tout Sweet: Hanging up My High Heels for a New Life in Rural France, will be available at a special promotional rate of £2.99 from March 7.