Film review: Manchester by the Sea

Published by Emma Lee-Potter in on Friday 6th January 2017 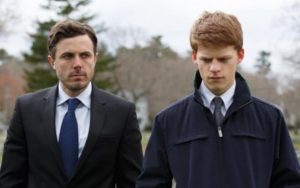 The Times critic Kate Muir has described Manchester by the Sea as “the most emotionally intelligent film you will see this year” – and she’s probably right.

The main problem is that January isn’t the best month to see it. January is a downbeat month to say the least. The days are short, it’s freezing cold and the bills for our reckless Christmas extravagances are dropping through the letterbox. On top of that, a huge swathe of us are doing Dry January, swapping six pm glasses of Pinot Grigio for a tumbler of fizzy water.

Manchester by the Sea is a brilliant movie but it’s unbearably sad. It stars Casey Affleck in a stand-out performance as Lee Chandler, a difficult, taciturn man working as a janitor in Quincy, Massachusetts. Within the first few minutes of the film he’s lost his temper with a couple of men in suits, simply because they’re staring at him from the other side of the bar.

Out of the blue he receives a telephone call telling him that his brother Joe has had a heart attack in the small fishing town where they grew up. By the time Lee reaches the hospital, it’s too late. Joe is dead and it’s left to Lee to break the news to his 16-year-old nephew Patrick. We get a hint of the locals’ wary attitude towards Lee when they mutter comments like “The Lee Chandler?” at the sight of him – but it takes a while for the heartrending truth to emerge.

Lee’s story is told gradually, in a series of flashbacks to his earlier life. When we see Lee as a handsome, hard-drinking and loving husband to his wife Randy (played by Michelle Williams) it’s a shock to realise how much he has changed. It’s testament to Casey Affleck’s fine performance that his transition from a happy-go-lucky young husband to a withdrawn man of few words is so convincing.

Manchester by the Sea has a lot to commend it, not least Lucas Hedges’s sympathetic performance as teenager Patrick. A lot of the time Patrick seems more mature than his uncle and I kept longing for Lee to see sense, find redemption and realise that making a home with his nephew would be the best thing for both of them.

The town of Manchester by the Sea, with its clapboard houses and open waters, is beautifully shot and the music, which ranges from soaring opera to Patrick’s tuneless teenage band, adds to the film’s emotional turmoil and depth. Manchester by the Sea, written and directed by Kenneth Lonergan, is definitely worth seeing – but maybe not in January.

Manchester by the Sea is out in the UK on January 13.