Published by Emma Lee-Potter in on Monday 27th October 2014 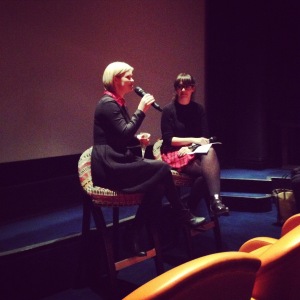 Cecelia Ahern is only 33 but she already has 11 novels to her name. She’s sold 22 million books around the world and her first novel, PS. I Love You, was made into a movie starring Gerard Butler and Hilary Swank. Now her second novel, Where Rainbows End, has been turned into Love, Rosie, with Lily Collins and Sam Claflin as the lead characters.

Ahead of its release, Grazia magazine held a screening at London’s Charlotte Street Hotel, a couple of minutes’ walk from Tottenham Court Road. I was lucky enough to get tickets and best of all, Cecelia Ahern did a brief Q&A with Grazia commissioning editor Emily Phillips ahead of the film.

Ahern, looking chic in a black dress with a scarlet collar and knee-high black boots, was charming and surprisingly self-deprecating for a writer who gets better and better with every book.

She wrote Where Rainbows End when she was 21 – inspired by the idea of “telling a love story through letters.” Twelve years later the story has metamorphosed into Love, Rosie and Ahern is thrilled with the result.

Asked if she was happy with stars Lily Collins and Sam Claflin, she replied: “They are amazing. The film has a really cool cast. It’s fun, it’s edgy, it’s cool. I want to be them all.”

Ahern originally had a cameo role in the film but the scene was cut. “I was like a stalker on the set,” she told the Grazia audience. “I had no job. I wanted to have a cable to hold, just to give me a purpose.”

When it came to describing the film she said: “Just enjoy it. It’s a moving story. One moment you will be laughing, the next you will be rooting for your tissues. Obviously I’m biased but I do think you will like it.”

So did the audience like it? Well yes, actually we did. Love, Rosie is a sweet movie, with a sweet performance by Lily Collins, and we all liked it a lot.

Rosie, played by Collins, and Alex (played by Claflin) have been best friends since the age of five. As teenagers they are both on the verge of going to university in the US (slightly annoyingly, Alex is heading for a scholarship to study medicine at Harvard while Rosie is planning to do hospitality) but then fate dramatically intervenes. Over the next 12 years their lives change dramatically on either side of the Atlantic but throughout it all they stay in touch – through births, marriages and bereavement.

The glorious Jaime Winston has a supporting role as Rosie’s straight-talking friend Ruby and model Suki Waterhouse looks stunning as Bethany, the femme fatale who whisks Alex away from Rosie. If you’re looking for an enjoyable movie that’s as light as the air and gloriously undemanding, then this is definitely the film for you.