Published by Emma Lee-Potter in on Thursday 30th April 2015 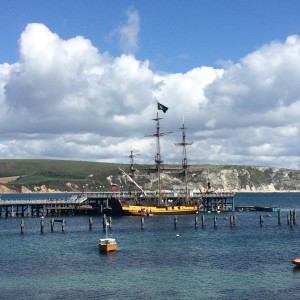 It’s not every day that you walk to the newsagent’s for a paper and bump into a group of swashbuckling pirates in the car park, their faces caked in make-up and sporting frock coats and breeches.

The quiet seaside town of Swanage hasn’t seen anything like it in ages. A film crew has swept into town, with an army of trucks, loads of security men brandishing walkie-talkies and stars like Stanley Tucci and Paloma Faith.

I got all my information from the man in the car park but apparently they’re filming a new version of the Lost Boys and Peter Pan – only this time the whole thing has been brought up to date by a feisty Wendy who escapes to her own Neverland while undergoing treatment at Great Ormond Street Hospital (which incidentally owns the Peter Pan copyright).

We quickly paid 80p a piece to stroll along Swanage’s historic pier and take a good look at the star of the show (aside from the divine Stanley Tucci, that is). Captain Hook’s pirate ship is the talk of the town. It’s been moored in the bay for four days now, Jolly Roger flag fluttering in the brisk April breeze. Actually, the film crew couldn’t have chosen better weather for it – the Dorset coast looks stunning, all bright sunshine and azure skies – which probably accounts for their friendliness and good humour.

PS. The man in the car park says the drama will be shown on ITV over Christmas. How reliable his information is I have no idea.