Film – The Theory of Everything

Published by Emma Lee-Potter in on Monday 12th January 2015 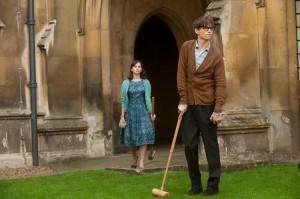 Film awards are a bit of a lottery but the right man definitely won the Best Actor in a Motion Picture Drama award at the Golden Globes last night.

Eddie Redmayne’s portrayal of scientist Stephen Hawking in The Theory of Everything is astounding.

I’ve only seen him in roles like Angel Clare in Tess of the d’Urbervilles and Marius Pontmercy in Les Misérables before so I wasn’t sure he could pull the Stephen Hawking role off. But the way he portrays the deterioration of Hawking’s body as motor neurone disease robs him of movement and the ability to speak is breathtaking. As he changes from a bright young PhD student into a world-renowned, wheelchair-bound physicist Redmayne is by turns touching, witty, tragic – and utterly convincing. It’s definitely the stand-out performance of his career.

Felicity Jones is equally impressive as Jane, Stephen Hawking’s first wife. The couple met as Cambridge students in the 1960s and director James Marsh movingly follows their relationship as they strive to cope with Stephen’s illness. Jones, who began her career playing Emma Carter in The Archers, is every bit as believable as Redmayne as she goes from lovestruck young girl to weary yet devoted carer.

The biopic is very much the story of the couple’s relationship and the ways in which it is tested over the years. It doesn’t dwell much on Hawking’s scientific achievements, beyond him scribbling a series of baffling equations on a blackboard and giving a lecture about his research to a group of astonished professors, but it’s a tour de force all the same.