Christmas turkey, stuffing and life as the world’s most useless au pair

Published by Emma Lee-Potter in on Monday 28th November 2011 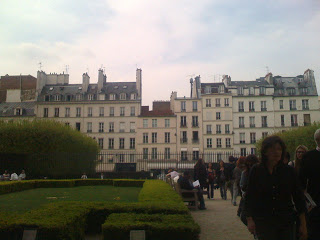 With less than a month to go, I’m worrying about the Christmas turkey. I know I should have cracked it by now but the truth is that I’m useless at whizzing up traditional lunches. I love cooking but can’t do gravy or stuffing. As for bread sauce, well it just sounds horrible to me. In fact most of the recipes I cook are the ones my mum taught me when I moved to Paris (above) at the age of 18 to become the world’s worst au pair. I was so clueless about cooking that the night before I left I hastily copied down her staple recipes for soups, flans, risottos, pasta and stuffed peppers. Actually, copied is the wrong word. My mum recited them from memory off the top of her head. When I got to France, the recipes went down a storm with the four little girls I looked after. They were aged between one and nine years old, and apart from the cooking and making up bedtime stories, I was hopelessly out of my depth. The little girls’ mother was a nurse and she was stunned to discover I’d never changed a nappy, couldn’t drive, couldn’t speak fluent French and couldn’t make beds with hospital corners. Worse still, I didn’t even know what hospital corners were! My own mum was a brilliant, instinctive cook who never measured ingredients (a habit I’ve copied). When anyone asked her for a recipe, which they did all the time, she’d wave her hands vaguely and tell them to add a heap of this and a few spoonfuls of that. She wasn’t into fancy kitchen gadgets either. A friend who came to stay for the weekend was so shocked by her temperamental cooker and solitary blunt knife that he promptly went out and bought her a Baby Belling and a set of sleek, razor-sharp knives. My mum was touched, but utterly mystified. She proceeded to carry on as before, perfectly happy with the dodgy stove and duff knife.