Published by Emma Lee-Potter in on Friday 27th November 2015 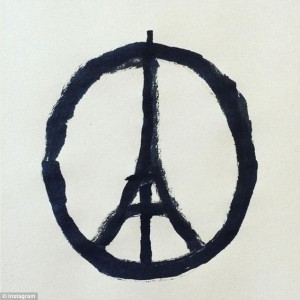 The French capital fell silent today, in tribute to the 130 victims who died at the hands of the terrorists in the Paris attacks. Blue, white and red flags fluttered from every window as survivors, relatives of the dead and political leaders gathered under a wintery sky for a remembrance ceremony at Les Invalides.

It’s still hard to comprehend the terrible events of Friday November 13. But one thing’s for sure, Parisians have reacted with dignity and courage, unwavering in their determination to carry on living their lives in the best way possible. They are still going to their local boulangerie every morning, still dining out at their favourite café every evening. Tous au bistrot has been the rallying cry.

Parisians are indomitable and the last fortnight has proved it. I first came to that conclusion when I met Anne Marie, my husband’s French teacher and devoted friend, in the 1990s. She was in her 70s by then but she had joie de vivre written through every core of her being. She thought nothing of going to a four-hour opera, having dinner afterwards and then walking halfway across the city to get home. Instead of going straight to bed she’d immediately open a bottle of red wine and settle down to discuss politics, philosophy, literature and music till the early hours of the morning.

Tall and elegant, Anne Marie was one of the most charming people I’ve ever known. Even so, she was always straight to the point. When, after a few lessons at her language school on the Champs-Elysées, my husband asked her if he’d ever get rid of his English accent and speak French like a Parisian she cut him off in mid-sentence. “Of course not,” she retorted. “C’est impossible.”

One of my fondest memories is of the evening Anne Marie invited our whole family to dinner at her top-floor flat. My daughter was 13 and my son 11 and Anne Marie immediately roped them into helping her to cook in her tiny kitchen. There was one rule – they could only speak French. They both looked horrified, yet instead of protesting they did as she asked. Ten years on, neither of them will ever forget the phrase “il faut débarraser la table” (you must clear the table). It embued the pair of them with a life-long devotion for Anne Marie and the resolve to speak fluent French, which they both now do.

Anne Marie died two years ago. She was in her 80s by then, proud and resolute to the last. She would have been filled with sadness and outrage at the Paris attacks. But like her fellow Parisians she would have been determined to carry on as always, going to the theatre, walking home at midnight and talking about philosophy, literature and music till dawn.