Published by Emma Lee-Potter in on Friday 10th April 2020 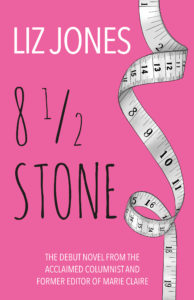 I’ve been an admirer of Liz Jones’s column in the Mail on Sunday’s You magazine for years. She’s outspoken and controversial – and SO readable.

As I wrote in my blog back in 2011: “I turn to her page before anything else. I occasionally get fed up with accounts of her huge menagerie of animals but even so, she writes so well and with such disarming frankness that her diary is a must-read.”

The good news is that Liz has now produced her first novel, 8½ Stone. The ebook is published this weekend (the paperback will be out in August) – and it’s a riveting read.

She started writing the book five years ago, after she’d lost her home and everything she owned. “The only way I got through it was by writing, and making myself laugh,” she says. “I have always self-medicated with funny books, and wanted to write something that made women who might be miserable or cheated on or broke or feeling woefully unsuccessful feel a little better. The book is rooted in my reality: I always felt my life would start and I’d be happy once I reached my target weight. Then I got thin, and life was still rubbish and I still hated my body. I realised true happiness only comes with self-acceptance. So here it is. And I hope it at least makes you smile. And reach for that doughnut.”

The star of the show is Pam, an overweight mum of twins who works in fashion PR and longs to be skinny. “When I reach eight and a half stone I will be able to shop in Topshop,” she says. “I will be able to go swimming and not displace all the water and create a tsunami. I will fit in changing rooms without banging my elbows or exposing the moon of my arse through the curtain when I bend over. I will be able to fit behind the narrow benches at Ronnie Scott’s to listen to jazz instead of being offered a chair at the end of the row. I’ll be able to see my toes, which I haven’t seen since 1996 without the aid of a selfie stick. I will be promoted and not have my desk moved to inside the stationery cupboard for being off-brand.”

The first half of the book tells “Big Pam’s story”, while the second, Little Pam’s story”, covers the aftermath of Pam’s cosmetic surgery to lose weight. Fans of Liz’s column will recognise elements of the journalist herself in Little Pam, from her desire to look perfect to her fury when her new boyfriend two-times her with “the sort of posh girl who travels to India in Birkenstocks to tell indigenous people how to dig wells”.

8½ Stone is very readable but Big Pam’s story isn’t as convincing as Little Pam’s. Liz is brilliant at portraying the world of fashion journalism and catwalk shows but less so when it comes to Big Pam’s life as a put-upon mum who adores coffee walnut whips and has tried every diet under the sun. But as always, she comes up with some great one-liners and she’s insightful about the hypocrisy of the fashion world, where women are “supposed to stay slim, and supple, and young, and raven-haired, and smooth-skinned, forever”.

The most moving part of 8½ Stone is the postscript, where Liz writes as herself rather than as Pam. With her characteristic straight-talking honesty she explains that she wrote the novel “because I have wasted my entire life trying to be something I am not and I would hate for any other woman to waste her life in the same way”. Wise words – as are the final words of the book. “Ladies. Just be kind to yourselves.”

The novel is out now as an ebook and is available at all outlets, including Apple Books and Kindle. The paperback will be published in August.

PS. Thank you very much to Martina Ticic of Midas PR for asking me to take part in the 8½ Stone blog tour.