Published by Emma Lee-Potter in on Sunday 19th May 2019 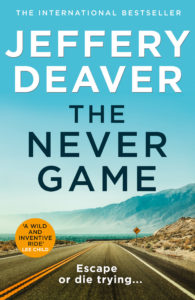 When it comes to writing thrillers with dizzying plot twists Jeffery Deaver is second to none. He’s written more than 30 page-turning thrillers, sold more than 50 million books around the world and been translated into 25 languages.

I’ve been a fan of Deaver’s writing for years. I was lucky enough to interview him six years ago and during the course of our conversation I discovered that while his clever and intricately-plotted crime stories terrify the living daylights out of his readers, me included, in person he’s charming and outgoing. As we chatted at a chic Notting Hill hotel on a blisteringly hot summer’s afternoon he told me: “Fear on every page is a continual theme of my books but I never think ‘this could scare people too much’. You can, however, repulse people. That’s why, believe it or not, my books are not violent. And I am very conscious of never hurting children or animals.

“I adhere to what I call the Alfred Hitchcock model in that my books are suspenseful but not gruesome. I find the enjoyment of anticipating something terrible happening and then cutting away from what does happen – whether people are saved or whether they perish – a more wholesome and fulfilling experience than dwelling on gruesome scenes.”

So it was a huge treat when Deaver’s latest novel, The Never Game, landed on the doormat earlier this month.

The book is the first in a new series featuring enigmatic investigator Colter Shaw and it gripped me from the very first page. Shaw is a fascinating character, a man with an intriguing background (he grew up in a survivalist family, was homeschooled and is an expert tracker). He now makes his living as “a reward seeker”, travelling around the country helping to solve crimes and find missing people.

At the start of the novel a distraught father has hired Shaw to find his teenage daughter, who has gone missing in the Silicon Valley. At first sight the case appears straightforward but when a second victim is kidnapped Shaw becomes convinced that the crimes are connected to a sinister video game called The Whispering Man. The game involves victims being abandoned in the middle of nowhere with five random objects. If they want to survive they must use the objects to get out alive.

It’s an ingenious premise for a novel but the most fascinating part of the story is Colter Shaw himself. Cool, calm and ultra-focused, he starts every investigation by following his late father’s advice. In other words,  he assesses the odds of every eventuality and then works out the most appropriate strategy.

Best of all, The Never Game prepares the way for future books in the series. Deaver gives us plenty of fascinating detail about Shaw but the reader is left wanting to know an awful lot more – from the truth about his father’s demise to what became of his older brother. I for one can’t wait to find out.