Published by Emma Lee-Potter in on Saturday 7th September 2019 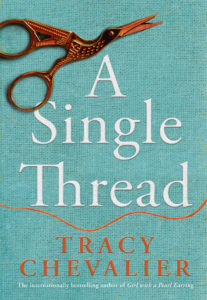 A new novel by Tracy Chevalier is always a treat. I’ve loved her books since her first, A Virgin Blue, was published way back in 1997 and in the intervening years she’s gone from strength to strength. Her 10 novels include the brilliant Girl with a Pearl Earring, which has sold more than five million copies and was made into an Oscar-nominated film starring Scarlett Johansson and Colin Firth.

Her latest, A Single Thread, is set in 1932, when the terrible losses of the First World War are still keenly felt and very raw. Violet Speedwell, the novel’s lead character, lost both her fiancé and her brother in the war and at 38 she’s seen as a “surplus woman” who is unlikely to marry.

Violet finally resolves to escape her overbearing and judgemental mother, who “wore a frown even in sleep”, and strike out on her own. She duly moves to Winchester, where she rents a room in a draughty boarding house and works as a typist. Her life takes a more interesting turn when she joins the broderers, a disparate group of women who embroider kneelers for Winchester Cathedral. She soon becomes entwined in their lives and secrets (the formidable Mrs Biggins, who organises the broderers, is a great comic creation, with some caustic one-liners) and forms a friendship with a cathedral bellringer that will change her life.

Tracy Chevalier is brilliant at portraying time and place. When I reviewed Burning Bright, her novel set in 18th century London, a few years back, I remarked how I could “almost smell the smoke and mildewed clothes, see the gaunt, pock-marked faces of people struggling to survive.” She performs a similar feat in A Single Thread. I could picture every scene in my mind’s eye – from Violet’s chilly, cramped room with fawn stockings drying on a rack to the 900-year-old cathedral itself – “a source of refuge for so many over the centuries”.

Once again Chevalier has produced a remarkable book. A Single Thread is evocative, beautifully written, impeccably researched – and immensely readable.