Published by Emma Lee-Potter in on Saturday 20th July 2019 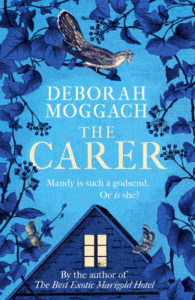 I’ve been a fan of Deborah Moggach for years – ever since her first novel, You Must be Sisters, was published in 1978. I even interviewed her once, when the newspaper I was working for at the time inexplicably sent me to talk to her on New Year’s Day. She was charm personified, even though the last thing in the world she must have wanted first thing on January 1 was to talk to a journalist. Mortifyingly, the piece never even made the paper.

The Carer is Moggach’s 19th novel and it’s a timely read when we’re all worried about care for the elderly. The story focuses on James Wentworth, a once eminent physics professor who’s now in his 80s and whose health is declining. His middle-aged children, Phoebe and Robert, live miles away and are busy with their own lives so they decide to employ a carer to look after him. Mandy sweeps into the house and turns out to be everything that Phoebe and Robert aren’t. She’s happy to attend to James’s needs, takes him on jaunts to places he wouldn’t have dreamed of setting foot in before and even calls him “Jim” or “Pops”.

James’s children gradually sense that something is amiss. When they were young they worshipped their father but resented his absorption in his work and his all-too-frequent absences. Now he seems to be changing before their eyes. He loves watching box sets with Mandy,  takes a close interest in the neighbours’ lives and enjoys nothing more than visiting retail parks and hedgehog sanctuaries.

Moggach, whose previous novels include The Best Exotic Marigold Hotel (originally These Foolish Things), is the sort of novelist who makes writing look easy. Her prose flows so smoothly and her stories are so compelling that before you know it hours have slid by and you’ve almost finished the book. I read this in one sitting, mesmerised by Moggach’s uncanny eye for the truth and desperate to discover if Mandy is really a godsend or not.

The Carer is poignant, insightful and funny and will particularly resonate with anyone who has ever employed a carer for their loved ones. In my experience most of them are saints but just occasionally there’s one who isn’t. Which is Mandy?