Published by Emma Lee-Potter in on Saturday 13th June 2015 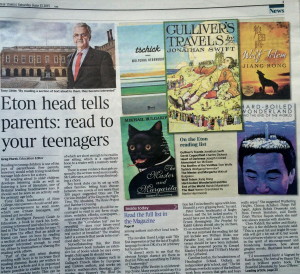 I’ve worked as a freelance education journalist for years, interviewing heads and teachers, eating rather a lot of school dinners and writing about the inspiring work schools are doing. I got into it in the first place because I spent a year or so teaching at an FE college myself and quickly realised that it’s one of the hardest and most demanding jobs there is. Ten years later, having seen hundreds of teachers in action in the classroom, my opinion hasn’t changed.

I’ve interviewed Tony Little, the head master of Eton College, twice and on both occasions I have been struck by his wisdom, dedication and unstuffiness. Most of all I’m impressed by the way he’s worked tirelessly to widen access to the school to boys from all backgrounds. The first time I met him I remember him saying “we do not want to be a finishing school for the titled and rich” – and he’s remained true to that. His achievements are many but he’s started a partnership between Eton and six local state schools and helped to found a state boarding school called Holyport College. Eton currently has 270 boys who receive “significant” financial help on a means-tested basis and 70 who pay nothing at all.

He’s given several interviews in recent weeks – both to mark his retirement and to talk about his forthcoming book, An Intelligent Person’s Guide to Education. As always, his words are full of good sense and designed to get people talking about education. His interview with The Times today is no exception, especially his appeal to parents to read aloud to their teenage sons. “I have seen the effect that an adult or friend can have on boys by reading a section of text aloud to them,” he says. “They become interested enough to read on, either by themselves or sharing the reading with others.”

My son is 20 now and I haven’t read aloud to him since he was about nine and obsessed with Anthony Horowitz and Robert Muchamore (thank goodness for that, I can imagine him saying). We do, however, talk about books a lot. He’s at university four hours from home and with two bikes, a turbo trainer, a longboard, a skateboard, a surfboard (he likes boards) and a toolbox full of bike bits he can’t get back by train at the end of the year. So that means a long car journey – and in our case a good audiobook to listen to. Over the years we’ve got through all of Kate Atkinson’s Jackson Brodie books, quite a few Robert Harris and Nick Hornby titles, some John le Carré (A Delicate Truth was a big hit) and yes, the inevitable Cracked podcasts. We’ve discussed them all and they’ve helped to get him back into reading again.

A few commentators have quibbled with Tony Little’s book recommendations for bright 16-year-olds – everything from Atonement by Ian McEwan (I agree wholeheartedly) to Homer’s The Iliad (not so sure) – but most important of all, the Eton head has got us talking about teenagers and books. And that’s got to be a very good thing.