Published by Emma Lee-Potter in on Thursday 8th February 2018 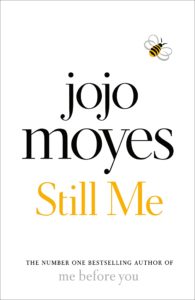 Jojo Moyes’s Me Before You was such an extraordinary book that I couldn’t imagine how she’d ever write a follow-up. But then again, lead character Lou Clark was so immensely likeable that readers were desperate to find out how her life panned out after losing Will Traynor, the wheelchair bound city financier she cared for. So Jojo wrote a second novel about Lou, After You, and now there’s a third one too.

I’ve just read Still Me from cover to cover in one go and it’s another winner. Never one to take the easy option, Jojo has set the third book in the trilogy in New York. This time round, Lou has taken a job as assistant to Agnes Gopnik, the beautiful and brittle second wife of a stupendously wealthy and much older businessman. In so doing, Lou has left her new paramedic boyfriend Sam behind in London and is determined to carve out a life for herself in the Big Apple.

Jojo always creates characters you care about and Still Me is full of them, particularly Margo De Witt, a cantankerous old lady who lives in the same apartment block as the Gopniks with her grumpy pug, the brilliantly named Dean Martin. I loved everything about Mrs De Witt, from her outfits – “a raspberry pink duster coat, a red pillbox hat and huge tortoiseshell sunglasses that obscured her tiny, wrinkled face” – to her constant fury about Agnes Gopnik’s noisy piano playing.

Best of all, Still Me is a stunning portrait of New York – almost a love letter in itself. Jojo clearly knows the city well and conjures up its 24-hour craziness with insight and humour. She observes, for instance, how shop assistants always talk to you and tell you to have “a nice day” and how New Yorkers walk “really, really fast”. Lou herself walks miles, appreciating the sharp differences between the Meatpacking District and Greenwich Village and the roads around Crosby Street, “where every second person looked like a model or as if they owned an Instagram feed devoted to clean eating”.

Funnily enough, my least favourite parts of the novel are where Lou’s boyfriend Sam puts in an appearance. It could just be me but he seemed slightly whingy and unreliable compared to the effervescent and engaging Lou. That’s only a tiny complaint on my part though. The novel as a whole is a captivating read. And if you’ve just booked a trip to New York make sure you take the book with you. Lou’s excitement about living in Manhattan is infectious and you’ll want to visit all the places she writes about for yourself.