Published by Emma Lee-Potter in on Saturday 25th February 2017 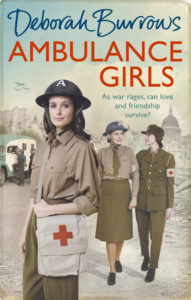 “As war rages, can love and friendship survive?” That’s the compelling tagline on the cover of Ambulance Girls, a new historical saga by Australian writer Deborah Burrows.

Having read the book, the tagline delivers what it promises – and a whole lot more besides.

Ambulance Girls is the story of Lily Brennan, a young ambulance driver in London during the Second World War. What makes the novel different is that ex-schoolteacher Lily was born and brought up in an Australian gold-mining town and has a unique perspective on the work of ambulance drivers during the war.

Fascinated by the books she read about Britain as a child – filled with “bluebell woods, picnics with Nanny in Hyde Park and snowy Christmases” – Lily saves as hard as she can and arrives in London in 1938. After a spell working as a governess in Czechoslovakia she returns to London when the Nazis march into Prague and joins the Ambulance Service in 1939.

Burrows is a brilliant researcher – she spent a lot of time in the Bodleian Library in Oxford researching London during the Blitz – and paints a vivid picture of everyday life in the capital. As Lily confronts the horror of wartime London – from bravely crawling into a bombed-out house to rescue a baby and small boy to dealing with the aftermath of a “tip and run” raid, where two planes dropped strings of bombs – she encounters a very different London to the one she read about as a child.

The book is packed with fascinating historical detail, including “the bombsite fug of soot and dust and that indefinable air raid smell of cordite” after a bombing and the fact that water mains “always ruptured” in a blast. Burrows also has an excellent knowledge of London. The novel moves from the ambulance station in Bloomsbury to the docks in the East End to Regent’s Park, where Lily attends an afternoon concert with an enigmatic Russian suitor.

Ambulance Girls is a love story but the Burrows is particularly good on the power of friendship during times of crisis. The banter between Lily and her ambulance colleague David Levy (they’re a bit like wartime equivalents of Dixie and Jeff, the two paramedics from BBC One’s Casualty) is superbly written. It’s all the more shocking when David, the subject of anti-Semitic remarks from fellow workers at the ambulance station, disappears in mysterious circumstances.

Ambulance Girls is a fascinating book – warm, authentic and utterly convincing. Burrows is writing two more books in the series, each documenting the lives of two more ambulance women, and I can’t wait to read them.