Published by Emma Lee-Potter in on Wednesday 22nd February 2017 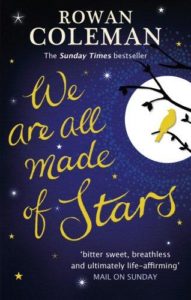 Afternoon tea, stunning views across a windswept sea and a captivating talk by a bestselling author. How could I resist the chance to hear Rowan Coleman talk about her books at the Purbeck Literary Festival this week?

If you haven’t discovered Rowan’s books yet you really should. She combines a compelling style with powerful narratives that don’t shy away from difficult subjects.

In the past she’s written about domestic abuse and Alzheimer’s (read my review of The Memory Book here). Her latest, We Are All Made of Stars, is the story of a hospice nurse who writes letters for her patients – to be posted to loved ones after their death.

She’s also written one of this year’s Quick Reads, Looking for Captain Poldark, the story of four strangers who are united by their love of TV’s Poldark series.

Interviewed by writer and Swanage hotelier Lyn Fegan, Rowan talked about her progression from being an imaginative child whose dyslexia wasn’t diagnosed until she was a 20-year-old university student to bestselling novelist. By the way, on the subject of dyslexia, she always tells fellow dyslexic children and adults: “It’s nothing to do with how clever or creative you are. It’s just mechanics.”

After graduating, Rowan worked in bookshops, where she got the chance to read early proofs of Helen Fielding’s Bridget Jones’s Diary and Nick Hornby’s High Fidelity, recommended a book (she can’t remember what) to Tom Cruise and survived on canapés and wine at book launches. When Andy McNab popped into the bookshop where she worked and offered to sign a stack of his books, she wasn’t convinced it was really him. “How do I know you’re Andy McNab?” she asked, prompting the author to ring his publisher to confirm his identity.

Her fiction breakthrough came when she spotted a short story competition in Company magazine. “The cut-off point was 30 and I was 29 and a half so I banged out a short story and put it in the post,” she said. “Six months later I found I had won – and that changed my career. It made me think ‘I will try this’ and within a year I had written my first novel.”

She has now written more than 30 books, including several titles for children and teenagers. She writes between 11am and 6pm in a small office above a bakery in the Hertfordshire town where she lives, eschewing all distractions and walking home to her guitarist husband and five children at the end of the day.

She loves Facebook and Twitter, describing them as the equivalent of “a water cooler” for writers. “As a writer you spend a lot of time on your own so it’s nice to talk to real people.” She very rarely says “buy my book” on social media, preferring to use it to chat to readers, make jokes and post pictures of her two dogs, Blossom and Bluebell.

When she starts writing her books, she always knows how they will end. She usually writes four drafts, redrafting and rebuilding them until she is happy with them. Right now she’s looking forward to the publication of her next novel, The Summer of Impossible Things, which will be out in June. It’s a time travel love story set in 1970s New York and the word on Twitter is that it’s brilliant. I can’t wait to read it.