Any Questions on BBC Radio 4 – and Jonathan Dimbleby’s phone

Published by Emma Lee-Potter in on Sunday 27th November 2011 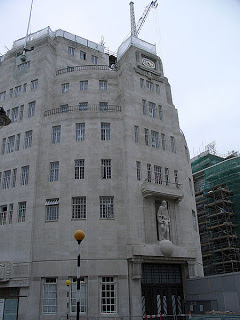 Friday evenings are my favourite time of the week. I switch off my computer, pour myself a glass of Pinot Grigio and settle down to listen to Any Questions on the radio. But this week was completely different. I jumped in the car with my son and hared down the motorway in the rush-hour traffic. We were in London by six, hopped on the number 94 bus to Oxford Circus and were just in time to join the long queue snaking round Broadcasting House (above) in the cold night air. Everyone in the line had applied for – and got – free tickets to hear the live broadcast of Radio 4’s Any Questions. Most weeks it’s hosted by schools and village halls up and down the country but this Friday it was coming from the BBC’s own radio theatre in the heart of central London. By the time we got into the radio theatre, each clutching a cup of the BBC’s very strong tea, we were full of anticipation. “Make sure you turn off your mobile,” I told my son, who proceeded to give me a science lecture about why it was fine to have it on “silent.” After a few minutes of arguing, he gave up the battle and switched it off. Just before eight pm, chairman Jonathan Dimbleby and the panel appeared onstage, looking surprisingly relaxed. To his right sat Tory MP Matthew Hancock and advertising boss Sir Martin Sorrell while to his left were shadow deputy PM Harriet Harman and TUC general secretary Brendan Barber. Then they were off, sounding impressively articulate considering they were on live radio and had Jonathan Dimbleby and producer Victoria Wakely gesticulating when it was time to start and stop talking. As they whizzed through the planned strike by public sector workers, jobs for 16 to 24 year olds and inequalities in pay, Harriet Harman was by far the best panellist – eloquent, charming and thoughtful. But then, just as Sir Martin Sorrell was in full flow about high earners, there was a faintly discernible buzzing sound from the stage. Victoria Wakely reacted like lightning. She reached inside Jonathan Dimbleby’s jacket pocket, removed his mobile phone and silently hurried offstage. “You should have turned your phone off,” Sir Martin told Dimbleby, divulging his guilty secret to all the listeners at home. The Any Questions host had the grace to look embarrassed. “I was preparing to ‘fess up,” he said. “Thank you very much.” At the end of the show my son turned to me. “You spent all that time telling me to turn off my phone,” he said. “You should have gone and told Jonathan Dimbleby too…”