A tale of two cooks

Published by Emma Lee-Potter in on Sunday 3rd November 2013 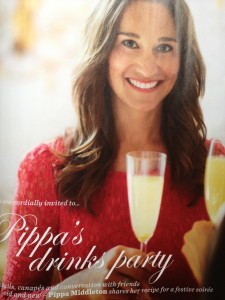 The rain was almost horizontal, the sky was pitch black and despite his satnav he’d struggled to find our house. But none of this dampened the supermarket delivery man’s spirits. He cheerfully deposited five bags of groceries in the kitchen, apologised for the missing Rachel’s yoghurt and promised to put a note on the system so the journey would be easier for the next driver.

I’ve rarely bothered with online food shopping before. When we lived in Oxford M&S was just two minutes’ walk away and there didn’t seem much point. But this week I discovered that Waitrose delivers to our seaside town so I decided to give it a shot. Now I’m a complete convert, apart, that is, from the fact that they also delivered a free copy of Waitrose Kitchen, a magazine I’d never read before. Well actually the magazine is great, but the November issue contains the most irritating piece about festive cocktails and canapés by Pippa Middleton.

If I was a young journalist struggling to get work in newspapers and magazines Pippa’s banal articles (she also writes for the Daily Telegraph) would make my blood boil.

This one is entitled “Pippa’s drinks party” and starts with the following lines: “I’ve been looking forward to writing this column for ages. Canapés are an obsession of mine and I love this time of year when the drinks parties are around the corner and I know I’ll soon be feasting on those small bites of deliciousness…”

Later on she introduces a recipe for a bizarre cocktail made from marmalade, lemon juice and sparkling white wine with the words: “Those who are partial to marmalade on toast for brekkie will love this bittersweet tipple that encapsulates the colour and scent of Christmas in a glass.”

As I flicked through the pages of Waitrose Kitchen my irritation was assuaged by the discovery that the November issue also features the mega-talented Jack Monroe. She’s the award-winning blogger who started agirlcalledjack.com in 2011, relating the challenges of cooking for herself and her young son on a budget of £10 a week. Her book, A Girl Called Jack, is out in the New Year and will do brilliantly. The thing about Jack is that she creates original recipes that are cheap and easy to make – and that I actually want to make.