Where the electrician ate his picnic

Published by Emma Lee-Potter in on Friday 30th October 2015 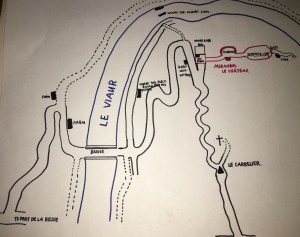 The discovery of a diary I kept during a family holiday in France is a reminder of how much childhood has changed in the last 40 years.

I was in my early teens at the time – gauche, awkward and alarmingly unsophisticated. Forget make-up, boys, sleepovers and texting, my holidays were spent playing endless rounds of a board game called Exploration with my sister, reading Lynne Reid Banks books (The L-Shaped Room was the height of daring) and occasionally catching the bus to the pictures in Bournemouth’s Westover Road. Strangely enough, I went to the same cinema this week for the first time in decades to see Spectre, the new James Bond movie.

But back to that diary. I was unpacking the boxes that I idly hadn’t got round to opening in two years when I came across a battered navy blue exercise book with lined pages and dog-eared corners. I remember my mum telling me and my sister we should keep a holiday diary during our sojourn in the Tarn region of France and we agreed, probably none too willingly.

As I flicked through my French diary I was impressed to see that every page was filled with the neat Italic writing I was taught at school. I’d listed in endless, tedious detail what we ate, what we did (lots of walks) and what I read. It was only a two-week holiday but I managed to whizz through eight books, including A Room with a View by EM Forster, Those without Shadows by Francoise Sagan and Term of Trial by James Barlow. The most hilarious page of all and one which I’ll never live down with my children showed a hand-drawn map of the place where we stayed, complete with labels like “where the electrician ate his picnic,” “barn with kittens” and “washing line.” Oh, the excitement of it all.

Actually, one eventful thing did happen and that was the sinking of the gite-owner’s pedalôt. We were happily pedalling down the river one afternoon when the boat started taking in water, tipping my mum, small brother Adam and me into the river. Here’s what I wrote:

“Luckily Mummy managed to grab Adam and we all swam ashore. But the boat and Adam’s and my shoes were under the river. We could not do anything about it until we had got a rope so we went back to the house for lunch.

“At two o’clock Daddy went to tell Mrs Roberts (the owner) about the boat. She did not seem very perturbed about it and said that it had happened before.

“Mummy and I went to try and get a rope from the nearby farms but they did not have one. On the way back we met the electrician and his son, who later brought their car and a big tow rope. Three French boys helped us by diving under the water and tying the rope on to the boat. The electrician drove his car and up the boat came. That evening Mrs Roberts came for drinks and we were relieved to tell her that the boat had been retrieved.”

Talk about wasting a good story…