Published by Emma Lee-Potter in on Thursday 7th April 2011 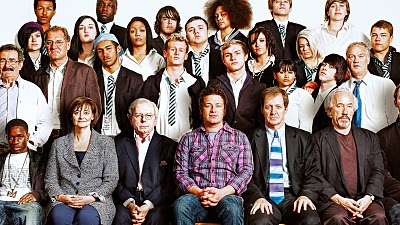 My must-see TV of the week is Channel 4’s Jamie’s Dream School – the series where Jamie Oliver gets a host of celebrities to teach 20 tricky teenagers who’ve left school with barely any qualifications.

The science teacher is fertility expert Lord Winston (who’s already hit the headlines for getting the boys in the class to study their own sperm). History is taught by Dr David Starkey, politics by spin doctor Alastair Campbell, drama by Simon Callow, music by Jazzie B (the best teacher by a mile, I reckon), art by Rolf Harris and maths by economist Alvin Hall. Other experts helping out include barrister Cherie Booth, sailor Ellen MacArthur, rapper Tinchy Stryder and former poet laureate Sir Andrew Motion.

Over two months the teachers have attempted to inspire the 16 to 18 year olds and (hopefully) persuade them to return to education. On the whole, the celebs have been utterly useless, especially the ones who blithely assumed they could stand at the front, talk about themselves and instantly command the students’ attention. They couldn’t of course. Most lessons have seen pupils walking out, yelling at the teacher, even picking fights.

The truth is, as the celebs have discovered to their cost, that teaching is an awful lot harder than it looks. I’m speaking from experience on this one. I tried my hand at teaching the same age group a few years ago and it’s one of the most difficult things I’ve ever done.

Looking back, I’m not sure I taught my lot very much at all. One girl fell asleep every lesson, a boy whizzed his skateboard along the classroom floor, others chatted and texted pals when I wasn’t looking and as for handing their work on time – sorry, it rarely happened.

Now Jamie has experienced what life in the 21st century classroom is really like he’s been quick to praise the teachers who do it day in day out. “I have to say that I’ve never admired teachers more than I do now,” he said. “Until you’ve tried it, you can’t possibly know what it’s like standing in front of a group of young people who aren’t interested in what you’re saying.”

If only a few of our politicians would give it a go too.