The Saturday before Christmas – cycling in the rain

Published by Emma Lee-Potter in on Sunday 23rd December 2012 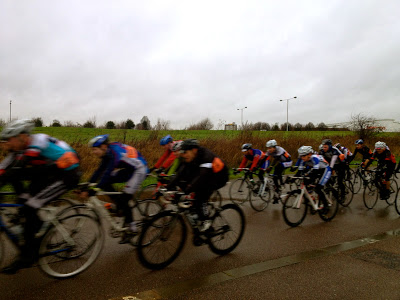 With a multitude of presents to wrap, a turkey to buy and red cabbage recipes to puzzle over, there was still only one place I could be on Saturday.

Not home. Not Sainsbury’s. And no, not even the off licence. No, with three days to go till Christmas, my family hot-footed it to the picturesque environs of Hillingdon Cycle Circuit, on the outskirts of West London.

Undeterred by the torrential rain, my bike-mad son had decided to enter his second-ever road race. He loaded his bike on to the car and we tore down the M40. The rest of the traffic seemed to be heading in the opposite direction, laden to the gunnels with Christmas presents.

By the time we got there, I half expected to find that the event had been called off. But cyclists are the hardiest people I know and a crowd of them, clad in fluorescent wet-weather gear, were busy warming up on their turbo trainers. My son, pale with nerves, grabbed his helmet and over-shoes and plunged into their midst. A middle-aged chap, clearly an old hand at road cycling, kindly gave him a load of advice about tactics. “If you fall off, protect yourself by getting into the foetal position,” he said. “The beetle position?” queried my husband. “What’s that?”

It seemed like an age before the event got underway – and a century before we saw him flash past in a sea of grit and Lycra. By the time he’d done forty minutes his face was splattered with mud and white with exhaustion.

But with another five laps to go before the finish, on they rode through the wind and the rain. Planes took off from nearby Heathrow and a wedding party drove by, but the cyclists kept their eyes on the track. Bradley Wiggins eat your heart out.