The Girl on the Train by Paula Hawkins

Published by Emma Lee-Potter in on Sunday 15th February 2015 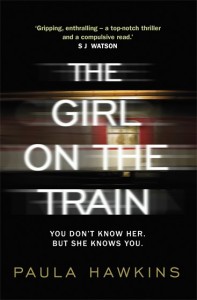 The brilliant Stylist magazine has just run a feature about “the most addictive page turners to chomp through in one weekend or less.” As the magazine says: “An addictive book is like a particularly tempting hunk of crumbly cheddar cheese. We know we should step back and take time to covet it over a series of slow, delicious weeks. But we can rarely resist the urge to dive straight in and snaffle it down in one greedy – yet deeply satisfying – gulp.”

Stylist counts Elizabeth Jane Howard’s The Light Years and The Curious Incident of the Dog in the Night-time by Mark Haddon among its top 20 addictive reads – and I adore both. But I was thrilled to see that two authors who’ve kept me turning the pages into the early hours make the cut too.

The first is Maggie O’Farrell., although in my case it was her first novel, After You’d Gone, that I remember reading till dawn, unable to put the book aside for a second (Stylist ‘s choice is The Distance Between Us).

The other is The Girl on the Train by Paula Hawkins, which I raced through in one compulsive sitting last week and which utterly enthralled me. I started it at about five pm (appropriately enough on the train) but simply couldn’t stop reading and carried on till two in the morning.

Paula Hawkins, a former Times business journalist who’s written four romantic novels under the name of Amy Silver, got the idea for The Girl on the Train during her commute to work. Staring into anonymous back gardens as her train sped by, she wondered what she would do if she spotted something sinister – and hey presto, the germ of an idea appeared.

Since then everything has snowballed. The hardback of The Girl on the Train shot straight to the top of the bestseller lists, it’s been optioned for a movie by Dreamworks and the Wall Street Journal has dubbed it the new Gone Girl. Praise indeed.

I’m not in the least surprised by any of these plaudits. I knew from the first riveting page that The Girl on the Train would be my sort of book – and sure enough, it’s a smart, pacy, engrossing read.

Rachel, the main character, is utterly believable – an alcoholic mess whose marriage has ended in divorce, whose ex is living in her old house with his new wife and baby daughter and who’s lost her job in embarrassing circumstances. She’s renting a room from an old university friend and, too proud to admit she’s been sacked, still gets the same commuter train in and out of London. The train stops at the same signal each day and she grows increasingly obsessed with “a perfect, golden couple,” whom she spots most days and secretly calls “Jess and Jason.” And then one day Rachel sees something shocking – and suddenly she’s not just the girl on the train any more.

PS: I usually agree with India Knight on EVERYTHING but I don’t concur with her verdict on The Girl on the Train in today’s Sunday Times. She criticises its “leaden, predictable plot” and “clunky, by-numbers structure that becomes unbearable after three chapters.” I couldn’t disagree more…