The calm after the storm

Published by Emma Lee-Potter in on Sunday 16th February 2014 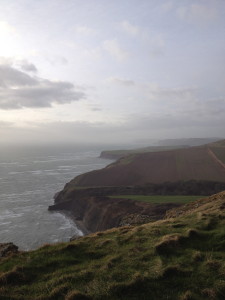 What a week that was. I don’t know if it’s anything to do with us but since we moved to the Dorset seaside there’s been one storm after another.

But they all paled into insignificance compared to Friday night’s tempest. Sitting in my first floor office I felt as though I was in a lighthouse. The wind and rain hammered furiously against the windows and the gale was so deafening that I couldn’t even hear the radio. My Twitter feed was full of tweets about sandbags, road closures and sea cascading across the local high street.

But I was one of the lucky ones. Three people died in what the Mail on Sunday has dubbed the “Valentine tempest,” thousands of homes in the UK have been flooded and thousands more (my father included) left without power for days. Flights, train journeys and road travel were all up the creek too – as my family discovered first hand.

My husband was in Paris for a meeting on Friday and was due to fly back to Southampton that night. A born optimist, he texted me at midnight to say “Just landed. At Manchester!” The plane had hovered above Southampton for an hour, waited above Gatwick for two hours and in the end the pilot had decided to divert two hundred miles north to Manchester. Needless to say, the Frenchman sitting in the row behind my husband was not amused.

The passengers then had to sit on the plane for another two hours because there weren’t enough buses to transport them to the terminal. Finally, at four am, my husband was put on a bus from Manchester to Southampton airport. He wandered into the house at ten a.m. with a bag of Parisian croissants, some L’Occitane soap and a copy of Friday’s Le Figaro.

PS. It turned out that Anna Wintour, the formidable editor-in-chief of US Vogue, had a similar experience. Flying to the UK on Friday for London Fashion Week, her flight from New York was diverted to, er… Newcastle. I’d wish I seen her reaction. But I bet she didn’t have to endure a five-hour drive south on a packed bus in the middle of the night.