The art of keeping in touch

Published by Emma Lee-Potter in on Tuesday 11th June 2013 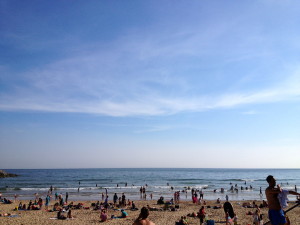 I was staggered when I read that the average family keeps in touch via 1,768 texts, 520 emails and 68 hours of phone calls a year.

It sounded like an awful lot so I scrolled through my phone to see how my own family measures up. I didn’t think we’d be in the same league so it was quite an eye opener to discover that in the past week me and my daughter have exchanged 58 texts, sent 30 emails and spent five hours on Skype. That’s before I add in the texts, emails and phone calls to my husband and son. I mean, I knew we all liked communicating but I didn’t realise we liked it that much.

Actually, trawling through the texts is like reading a diary of the week. In the past seven days my daughter’s sent me pictures of Paris in the sunshine while I’ve texted her  images of the horror that awaited me when I pitched up to collect my son from university . He told me he’d been packing for hours but with a mountain of washing scattered across the floor, assorted bike bits and mismatched items of china and saucepans it looked like a scene out of The Young Ones.

We were so exhausted by the time we’d cleared his room, taken a load to the local storage depot and packed the car that we had to drive along the coast to beautiful Caswell Bay to sit in the sun and calm down…

PS. It’s also been revealed that nearly half of all families use modern technology to communicate while they’re in the same house. Whoops. I’m guilty of that one too, largely because we live in a tall, narrow terrace and my children’s rooms are on the top floor. I can yell my head off that it’s time for supper but neither of them ever hear me. So what do I do? Text them, of course. I don’t bother with long-winded messages – just type SUPPER in capital letters. And yes, it works every time.