Published by Emma Lee-Potter in on Thursday 29th August 2013 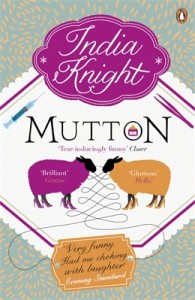 Middle age is a minefield. In my head I still think of myself as 23, even though my children reckon I’m about 123. When I try and impress them with tales of interviewing George Michael and Paul Weller in their heyday (and mine), they roll their eyes and mutter “but they’re so old…”

So India Knight is really on to something with her latest novel, Mutton. The second of her novels about forty-something Clara Hutt, it chronicles Clara’s attempts to cope with the vagaries of middle-age. Some of it is laugh-out-loud funny, like Clara’s outrage when she walks past a group of builders and for the first time in her life doesn’t get whistled at. In fact she’s so stunned that she strolls past again, and, er, still… nothing. Apart, that is, from the foreman raising his hard hat and saying “morning, madam.”

Actually, Clara is in pretty good nick for a 46-year-old. After all, she’s got three children, a glamorous job on a magazine, a couple of pairs of Louboutins, “some kickass underwear” and an on-off relationship with a man who’s just emigrated to Australia.

But when Clara’s old friend Gaby arrives back from LA and moves into a room on the top floor Clara starts to re-evaluate her life. Gaby is pushing 50 but she’s a yoga mogul who looks half the size and ten years younger than when Clara last saw her. Maybe, thinks Clara, it’s time she embarked on a bit of Botox and the odd nip and tuck herself.

As fellow devotees of her Sunday Times column will know, India Knight is a brilliant writer. She’s funny and wise and talks good sense in an unpreachy sort of way. The prologue of Mutton is in much the same vein – an A-Z of things that Clara (and presumably India) has started doing in middle age. These range from making sounds like “oof” when she sits down or bends to drinking pints of tea to asking “who are these people?” when reading a gossip magazine. Ahem. I’m pretty sure I do all of these too.

But even though I enjoyed Mutton a lot (apart from the bits about Clara’s son’s girlfriend’s dad and his tedious-sounding books about dragons and dungeons) I wish Knight would hurry up and write a longer, more ambitious novel about life in 21st century London. I’d be the first in the queue to read it.