Published by Emma Lee-Potter in on Thursday 25th July 2013 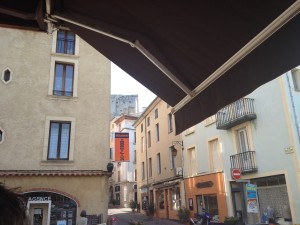 Sitting at our local café, with a noisette (an espresso with a dash of milk) and a croissant from my favourite boulangerie, all seemed right with the world. It was a sweltering 37 degrees but we had managed to nab a table in the shade, alongside old men reading Le Figaro and a couple of Dutch tourists.

Best of all, the café seemed a million miles away from the only news story of the week in the UK – the birth of Prince George of Cambridge. I enjoy a royal story as much as anyone but after listening to Radio Four’s extensive coverage and reading the UK newspapers online, enough was enough. I really didn’t want to read another word about the taxi driver who picked up the Middletons after they’d seen their grandson, designer muslins and bibs or the souvenir mugs, plates and yes, Christmas decorations that have been produced to celebrate the royal baby’s arrival.

So I reckoned France was definitely the place to be. Except it turned out that people this side of the channel are almost as gripped by the royal baby too.

We’ve been chucking piles of rubble and rubbish out at the House With No Name, filling a two-ton skip in the process. And when the driver turned up to pick up the skip the first thing he announced was: “I hear you’ve got a new king!”

Later on my husband set off on a bike ride up the local mountain – a 1,000-metre climb in the blistering heat, quite mad. A fellow cyclist from Nyons began chatting to him and they decided to cycle together. “Has Kate had her baby yet?” asked Eric, my husband’s new friend.

My husband, a man with republican tendencies, was completely flummoxed. “Kate who?” he replied.