Published by Emma Lee-Potter in on Sunday 18th September 2011 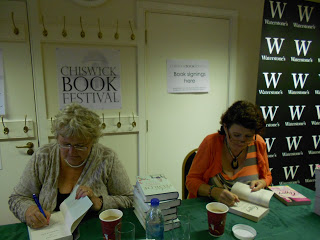 I adore literary festivals. So I was over the moon when the organisers of the Chiswick Book Festival asked me to chair a talk on romantic fiction by bestselling writers Katie Fforde and Kate Lace. The session was called My Big Fat Summer of Love (an amalgam of their two latest titles – Summer of Love by Katie Fforde and Gypsy Wedding by Kate Lace) and covered everything from how they began their illustrious careers to their own favourite romantic novels.

The pair, who are great friends, were fun, informative and inspiring. They’ve both chaired the Romantic Novelists’ Association in the past (indeed, Katie is now president), and several members of the audience were so enthused that they came up at the end and asked how they could join.

The writers began the afternoon by telling the audience about their roads to publication. Kate Fforde said that when her children were little she had a “serious Mills & Boon addiction” – one book a day in fact – and decided to have a go at writing one herself. In the end she wasn’t published by Mills & Boon but it was a fantastic way to learn her craft. She hasn’t looked back since her first novel, Living Dangerously, was published in 1995. She also praised the “hugely supportive” RNA. Meanwhile Kate Lace began writing as a young army wife with three small children, first writing for an magazine for army wives, then non-fiction, including Gumboots and Pearls about life as an army wife, before turning to fiction.

They also discussed exactly what makes a good romantic novel. Katie reckons that the key is to create “a believable love story,” and stressed that the happy ending must be “credible,” while Kate said that there must be some “grit in the oyster.” When it comes to planning novels, Kate said she knows where her books are going to start and finish, but doesn’t tend to plot everything in advance. Katie reckoned that if you plan too much, you’ve already told the story and “sort of lose interest.”

They both start work early – Katie is on Twitter at the crack of dawn but then concentrates on writing for the rest of the day. Kate works from 9am till The Archers starts at five past seven. Kate said that “scary deadlines” keep her nose to the grindstone, but Katie emphasised that it’s important to take time to think about her characters and where they are going. Sometimes her best ideas emerge when she’s gardening or cooking.

Finally, the two writers gave us a tantalising hint of the treats we’ve got in store. Katie’s next book is called Recipe for Love and is set in a TV cookery competition (it will be out next year) and she’s currently researching another one set in the world of antiques. Meanwhile Kate is busy writing about the glamorous world of rowing. Watching handsome, Lycra-clad rowers in action, she added, is no hardship at all.

PS: Actress Isla Blair is one of the loveliest people I’ve ever interviewed. I spent a day at her house years ago with a stylist and photographer for a Country Homes & Interiors profile. The following session at the Chiswick Book Festival featured Isla talking to her son Jamie Glover, the actor and director, about her new book. A Tiger’s Wedding tells of her childhood in India during the last days of the Raj and I can’t wait to read it.