Playing in the stream and a Greggs sausage roll

Published by Emma Lee-Potter in on Monday 26th August 2013 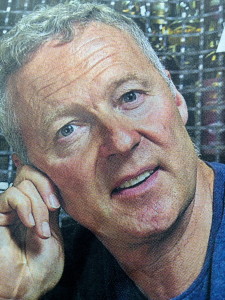 I’ve never been a particular fan of the comedian Rory Bremner but he made a lot of sense in a Sunday Times profile this week.

Interviewed by the talented Margarette Driscoll, he talked about the house in the Scottish borders where he and his artist wife and their daughters of 12 and 10 decamp during the school holidays.

“My wife and I both had childhoods in Scotland and my daughters were then nine and seven,” said the comic (probably best-known for his uncannily accurate Tony Blair impersonations). “… I wanted them to have 10 years of that kind of childhood, where the biggest delight of the day is playing in the stream or having a Greggs sausage roll on the way back from some pony rally or other and not spending their lives immersed in iPods and make-up.”

I reckon he’s on to something, especially during an age where one in 10 children have their own mobile phone by the age of five and the rest of us are glued to our computers and phones night and day.

We went to the fantastic Bill’s in Oxford last night to celebrate my husband and son doing a 100-mile sportive on their bikes. We got a table by the window with a glorious view of the Oxford Union and found ourselves sitting next to a couple with two young sons. Hmmm, I know it’s nothing to do with me but I couldn’t help noticing that the man spent almost the entire meal mesmerised by his iPhone.

But interestingly, it was my 19-year-old son, a child of the technology age himself, who was the most shocked. He then proceeded to tell us about a father and son he had sat next to on the bus back from London a couple of days earlier.

“He was such a good dad,” said my son. “The little boy asked him question after question, most of them completely random, and the dad was so patient. He answered every single one without ever sounding bored or fed up. And he didn’t look at his phone once.”