Pitch across the pond and beyond

Published by Emma Lee-Potter in on Wednesday 17th April 2013 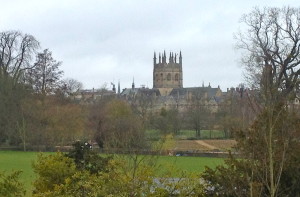 One was a straight-talking US agent in turquoise trainers who’d flown into Heathrow at dawn. The other was a former philosophy teacher in a charcoal suit who founded the Bragelonne publishing house in Paris.

At first sight Christine Witthohn and Stéphane Marsan made an unlikely speaking duo but with years of experience in publishing, a willingness to share their expertise and a dry sense of humour, they each gave a fascinating insight into books, genres, pitching to the US and France and how to succeed as an author.

The day-long session, entitled Pitch Across the Pond and Beyond and hosted by Oxford Author Courses, was held at St Hilda’s College in Oxford. It was a heavenly setting, with views across a wide expanse of lawn to the dreaming spires in the distance.

Stéphane Marsan started out as a philosophy teacher and fell into publishing “by accident.” He set up his own publishing house on April Fool’s Day in 2000 with two colleagues and 13 years later the company has been named publishing company of the decade and employs nearly 50 people.

Christine Witthohn originally planned a career in medicine but became a literary agent because “I love books.” She described herself as an outsider in publishing who didn’t know anything about the book business when she started out. But she has built her list of clients through hard graft and flair and founded the Book Cents Literary Agency in 2006. Over the years she has sold many of her clients’ books to Stéphane’s company.

The writers in the room scribbled feverishly as the pair threw out a ton of valuable advice. My favourite tip of the day came from Christine, who told us: “If publishers could predict what was going to be a hit we would all be rich. I don’t think a writer can chase a genre. By the time you have written it, it has gone. Write what you want to write. When you love something it shows. And when you are forcing yourself to write it shows.”

Christine declared that the self publishing market is “over-saturated with s…” and added: “Now you guys can see what it’s like to read slush.” She also expressed doubts about how long the self-publishing bubble will last. “I’m not poo-pooing self publishing, but authors can’t do it all,” she said. “The publisher is the engine that pushes everything. Don’t discount what publishers do.”

A woman in the audience asked whether either of them had an eye on film when they signed up authors. The pair were typically frank. “Always,” said Christine. “Never,” said Stéphane.

Someone else wondered if there were enduring patterns and themes that always did well for publishers. Christine declared that the Young Adult (YA) market is “completely over-saturated.” She mainly sells mainstream fiction, thrillers and new adult (a slightly more grown-up version of YA) and reckons that publishers want contemporary settings right now.

Another member of the audience said that novels with Scotsmen in kilts always do well while author Lynne Connolly, a British author who is hugely successful in the US, said that her novels featuring rock stars were being snapped up like hot cakes. Christine looked dubious. “Rock stars and Hollywood stars are so over done,” she said. “That would be a hard sell for me.”

Meanwhile Stéphane mused that iconic settings, like Provence, Paris, London, Edinburgh and (hurrah) Oxford, tend to sell. And so do stories of romance and love, he said – “that is universal.”

Hmmm. Perhaps the secret is to lock myself away and write a novel about a rock star from Oxford who likes wearing kilts. Watch this space…