Published by Emma Lee-Potter in on Tuesday 29th November 2011 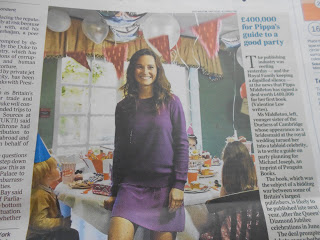 Twitter was awash with amazement yesterday that Pippa Middleton has signed a deal worth £400,000 to write her first book. And no, she’s not spilling the beans on growing up with her elder sister, the Duchess of Cambridge. She’s being paid to write a guide on party planning for publisher Michael Joseph. They weren’t the only ones falling over themselves to buy the book either. Apparently it was the subject of a fierce bidding war between some of Britain’s top publishing houses. Most writers would give their eye-teeth for such a contract – but sadly deals like this are few and far between, especially in these tough economic times. Some novelists work night and day for years on their manuscripts – and end up with a few hundred pounds in their pockets. And they’re the lucky ones. Many more never even get a sniff of a publishing deal. But envy aside, what on earth can Pippa Middleton, whose parents run mail-order business Party Pieces, say about parties that’s new? In a recent blog on children’s parties she wrote: “The key to creating a wonderful party lies not in spending vast amounts but in planning – from choice of venue, entertainer and party theme to the selection of food, decorations and the birthday cake.” Hmmm. Talk about stating the blooming obvious. I’m afraid Pippa will have to do an awful lot better than that to get people to buy the book. In my experience hosting children’s birthday parties is hard work, stressful and often ends in tears. The most successful one we ever held was for my daughter’s fourth birthday. I’d got everything planned to perfection (or so I thought) – a list of party games as long as your arm, food, a cake with my daughter’s name emblazoned across it and the all-essential party bags. My daughter’s birthday is just before Christmas so the centrepiece of the party was a gorgeous tree, resplendent with jewel-coloured decorations. The one thing we hadn’t foreseen however was the exuberance of 25 four-year-olds dancing about and throwing themselves to the floor. During a particularly rowdy game of musical bumps they dived to the ground with such force that the ten-foot tree wobbled violently and crashed over, fairy, decorations, lights and all. It was a moment of high drama (luckily the tree didn’t hit anyone) and it certainly made the event the most-talked about party in her nursery class for months afterwards.