Published by Emma Lee-Potter in on Thursday 15th September 2011 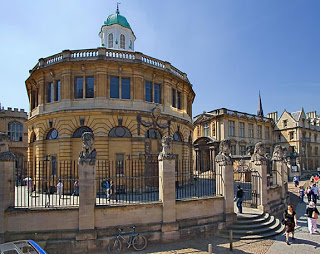 I’ve got a serious moving house habit. One that dates back to my childhood, when my father was in the RAF and we moved houses (sometimes countries) every year. I was always the new girl at school – the Billy No Mates who didn’t have a clue who to give my dinner money to or where to hang my PE bag.

It’s a habit that’s stuck. We’ve moved house an embarrassing 12 times in the last 25 years, and just like me, my children have been to a ridiculous number of schools. Friends who still use antiquated address books grumble that our page is a mess of crossings-out and ask why we can’t stay in one place for a while.

But now we live in Oxford, we might just do that. Samuel Johnson wrote that “when a man is tired of London, he is tired of life” and I feel the same about Oxford. One of the most beguiling cities in the world, it’s got everything – fine architecture, breathtaking views and a reputation for academic excellence second to none.

It’s a city that’s always been associated with creativity, ideas and innovation. The best-known architects of their age designed some of the country’s most inspiring buildings here – from Sir Christopher Wren’s magnificent Sheldonian Theatre (above) to James Gibbs’s Radcliffe Camera, a domed library built to house medical and scientific books. Oxford has also inspired some of our greatest writers. Lewis Carroll, creator of Alice in Wonderland, was a mathematics don at Christ Church, the Inklings, a group of writers that included CS Lewis and JRR Tolkein, used to discuss their work in the Eagle and Child pub in St Giles and Matthew Arnold immortalised the city’s “dreaming spires.”

Oxford is renowned for doing things first. It boasts the UK’s oldest botanic garden, as well as the exquisitely-restored Ashmolean, the first public museum in the world. William Morris launched the UK’s first mass-produced car here in the 1920s and it was at Oxford’s Radcliffe Infirmary in 1941 that penicillin was first used on a patient, founding the science of antibiotics.

The city’s moved with the times too. Once renowned for its Brideshead Revisited image, it’s probably just as famous these days for Inspector Morse and BMW’s stylish Mini, which is manufactured at the company’s Cowley plant.

Perhaps the best thing about Oxford is the passion it inspires in tourists and residents alike. Crime doyenne PD James said that “the air buzzes with intellectual argument and laughter.” What more could you ask of a city?