Published by Emma Lee-Potter in on Tuesday 24th May 2016 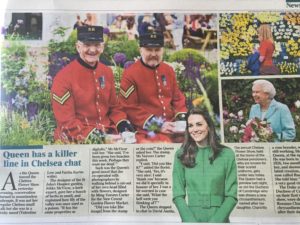 The Duke and Duchess of Cambridge visited the Chelsea Flower Show for the first time yesterday, Kate looking stunning in a bright green Catherine Walker dress.

Catherine Walker, of course, was one of Princess Diana’s favourite designers, which got me to thinking about the day I bought the most expensive item in my wardrobe.

As a freelance writer I spend most of my time in a uniform of Mint Velvet jeans, black jumper and my beloved Vans plimsolls. But right now I’m trying to work out what to wear to the first posh do I’ve been invited to in ages. I’ve got a stiff-backed invitation saying “Emma Lee-Potter and guest” and my husband and daughter are both so keen to be my “guest” that they’ve tossed a coin to decide who it will be.

After all the agonising I’ll probably end up wearing my treasured Catherine Walker dress. It’s the most expensive outfit I’ve ever bought but considering I snapped it up in 1987 and still wear it, it’s definitely earned its keep.

Mornings were a tough call when I worked as a news reporter back in the 80s. We had to be in the office by seven, ready to get cracking on the biggest news stories of the day soon after. Those were the days when Princess Diana was constantly splashed across the tabloid front pages – dancing onstage with Wayne Sleep as a birthday surprise for Prince Charles and dressing up as a policewoman for Fergie’s hen night.

One of the princess’s favourite designers was Catherine Walker, who sadly died in 2010 after a long battle with breast cancer. The French-born couturier created some of her most exquisite outfits, including an amazing pearl and sequin-encrusted white silk evening gown and matching bolero jacket that Diana called her “Elvis dress.”

When she started her business Catherine Walker modestly called it The Chelsea Design Company. She renamed it Catherine Walker & Co in 1994 but apparently she chose the original name because “in France you would be laughed at if you opened a shop and put your name on the door as a couturier, unless you had the obvious skill to back it up.”

Sitting on the top deck of the number 49 bus at dawn every morning as I travelled from Battersea to Fleet Street I used to gaze down at Catherine Walker’s simple, white-painted shop in Chelsea’s Sydney Street and marvel at her creations. I dreamed of buying one of her dresses – and one day I threw caution to the wind and actually did. I saved up my work expenses for weeks, keeping them in a battered brown envelope till I had enough. Then, clutching the envelope in my eager hand I went into the shop and bought a stunning navy dress, made of crepe and cut on the bias. The most embarrassing moment came when I had to pay. I opened up my battered envelope and handed the astonished shop assistant  £375 in grubby-looking notes.

Many years on, I don’t regret my rash purchase for a minute. The dress hasn’t dated at all and I still love it. And I take an awful lot of pleasure in the elegant Catherine Walker for The Chelsea Design Company label inside.