Published by Emma Lee-Potter in on Monday 28th December 2015 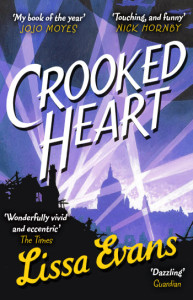 I loved Lissa Evans’s Crooked Heart when I read it last year – and now it’s out in paperback I’m enjoying it all over again. Here’s my original review:

Crooked Heart is a gem of a book – funny, endearing and beautifully written, with characters so well drawn that you can picture them in your mind’s eye.

Set during the Blitz, it’s the story of ten-year-old Noel Bostock, who lives on the edge of Hampstead Heath with his beloved godmother Mattie. Noel has nothing in common with other children of his age – for a start he’s read every Lord Peter Wimsey book going, plays with an ammonite rather than with toys and has the sophisticated vocabulary of someone twice his age. When his school closes, free-thinking former suffragette Mattie decides to teach him at home, tutoring him in esoteric subjects like the causes of the French Revolution and the nature of freedom.

But it’s clear from the outset that Mattie has dementia and Noel’s life changes forever after she disappears one morning. Much to his horror he is evacuated to St Albans and is taken in by Vee Sedge, whose life is even more chaotic than his own.

Vee is drowning in debt, has an invalid mother (who spends her time writing hilariously detailed letters to Winston Churchill and springs an unlikely surprise later in the book) and a feckless, weak-hearted son who doesn’t lift a finger to help.

Stuck for cash, Vee comes up with a daring (and distinctly dodgy) plan – and enlists Noel’s help. Together the unlikely duo knock on doors across the bombed suburbs of London and as the money rolls in Noel starts to come to terms with Mattie’s death.

Lissa Evans has written three previous novels, including Their Finest Hour and a Half, which was longlisted for the Orange Prize, but she has really hit her stride with Crooked Heart. The book evokes 1940s London quite brilliantly – the rationing, the endless hours spent in air raid shelters, the desperate measures people resorted to in order to survive – but more than that, her portrayals of Noel’s bond with Mattie and then with Vee are heartwarming and touching. If anything, his relationship with Vee is even more affecting than his attachment to Mattie. When he and Vee first meet, the odd, precociously clever Noel and the more impulsive, streetwise Vera are poles apart but as the months pass they become a close-knit pair, even more so when they find themselves in danger. Crooked Heart could well be the book that catapults Lissa Evans to bestsellerdom.