Published by Emma Lee-Potter in on Friday 4th September 2015

Spectacular. That really is the only way to describe the Museé de Civilisations de l’Europe et de la Méditerannée in Marseille – or MuCEM for short.

A rectangular building on the water’s edge, MuCEM is the stunningly bold vision of architect Rudy Ricciotti, who studied architecture in Marseille in his twenties.

Covered in intricately-cast concrete that’s designed to look like a lace veil, Riccioti’s creation not only looks beautiful but provides much-needed shade against the intense Provençal sun.

To add to the visual drama a high bridge – or passerelle in French – links the ultra-modern museum to the ancient Fort Saint-Jean, a 17th century stronghold that also houses museum exhibitions. The effect could have been disastrous but MuCEM is one of the most inspiring buildings I’ve ever seen. I wasn’t the only one to marvel either. Visitors crossing the passerelle at the same time as us stopped halfway to gaze in wonder. It helps, of course, that beyond the museum is the azure sea, gleaming boats heading into the old port and the islands in the distance that were immortalised by Alexandre Dumas in The Count of Monte Cristo. 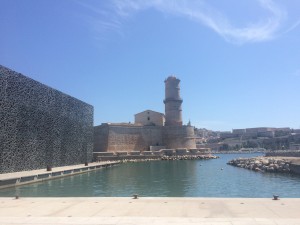 Marseille has long had a gritty reputation, partly thanks to The French Connection and partly because of its alarming crime levels, but I was bowled over by its dramatic beauty and the fact that it’s supposed to have 300 days of sunshine a year.

I was tempted to stay at the city’s Mama Shelter but instead we rented a flat in La Cité Radieuse, Le Corbusier’s iconic housing block in the south of the city. It boasts 337 apartments, some shops, a hotel and a nursery school. There’s a rooftop terrace where you can sit with a glass of wine in the evening and watch the sun set over the sea and a boulangerie on the third floor where you can buy your morning croissants.

One lunchtime we drove to the Calanques, the dramatic fjord-like inlets carved into the limestone cliffs, just a few miles from Marseille. Most of the Calanques are only accessible on foot or by boat but we visited Sormiou, where there’s a fantastic fish restaurant called La Chateau. We’d intended to walk but I’d stupidly left my walking boots behind so we drove – a dramatic, but if you don’t like heights, slightly scary journey down the cliffs to the sea. I managed to hold my nerve till we were on the home strait, when my husband jauntily gave a tired Parisian walker a lift. He didn’t speak English and while my French is ropey to say the least I did my best to make polite conversation. Terrified as we negotiated the bends but too polite to stop talking I managed for ten minutes until we got round another hairpin bend and the words “j’ai peur” popped out of my mouth. The Frenchman clearly thought I was the biggest wimp ever. “Pourquoi?” he askd with a puzzled expression. “C’est les montagnes…”