Published by Emma Lee-Potter in on Monday 23rd March 2015 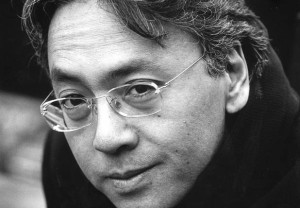 When I spotted that Kazuo Ishiguro was the star turn at the Oxford Literary Festival’s inaugural event this year I snapped up a couple of tickets in double quick time.

Ishiguro doesn’t do many events so I knew I couldn’t hang about or every seat would be gone.

Sure enough, when I arrived at the stunning upper chamber of Oxford Town Hall the place was packed – all of us eager to hear Ishiguro talk about The Buried Giant, his first book in a decade.

And the 60-year-old author didn’t disappoint. He was charming, courteous (constantly checking that everyone in the audience could hear) and surprisingly modest. When Lorien Kite, the FT’s books editor, declared that Ishiguro’s newly published novel was the bestselling book in the country at the moment he quietly corrected him – it was the bestseller in the hardcover fiction lists, he said.

Then it was straight to the meat of The Buried Giant, which, said Ishiguro has two questions at its heart – “when is it better to remember?” and “when is it better to forget?” These two questions, he explained, are applied to a long marriage (between protagonists Axl and Beatrice, who go on a gruelling search for their son in a war-torn landscape in sixth-century England) and to a nation. “I really wanted to write a novel about remembering and forgetting when applied to a nation,” he said, adding that the triggers for the novel were the events in Bosnia, Kosovo and Rwanda.

Asked why the novel took so long to write he laughingly admitted that his wife put a stop to an early draft ten years ago.

“I started this book right after finishing Never Let Me Go in 2004,” he said. “I showed the first 60 or 70 pages to my wife and she said ‘none of this can survive.’ She did say that it was quite intriguing, unusual, interesting, but she said it wouldn’t do. So I went away and did something else. I wrote a short story book and focused on the movie of Never Let Me Go and wrote some song lyrics.”

Astonishingly, the hugely acclaimed writer also confided that “I find it difficult to write novels. It doesn’t come naturally to me. I always seriously doubt whether I will be able to finish the book. When I am writing I am not that conscious of how it will be received.”

When questions were thrown open to the audience a sea of arms shot up. Asked about work that influenced him as a young reader he cited the Iliad, the Odyssey, Beowulf and old Samurai folk tales. He also said that he had learned a lot from the younger generation of writers – like David Mitchell and Alex Garland (who has now turned to film directing). “They have taught me not to be afraid,” he said.