Julie Cohen on the art of the rewrite

Published by Emma Lee-Potter in on Tuesday 28th April 2015 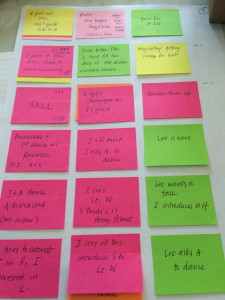 Julie Cohen is a one-woman dynamo. She’s not only had 20 books published, both under her own name and pseudonyms, but they’ve sold nearly a million copies and been translated into 15 languages. Dear Thing, her 2014 novel, was a Richard and Judy Book Club choice and her latest, Where Love Lies, is now out in paperback.

With a track record like that, Julie clearly knows what she’s talking about so I was thrilled to hear her speak at this year’s Chipping Norton Literary Festival.

The subject was The Art of the Rewrite and not surprisingly the workshop was packed to the gunnels.

When Julie embarks on a novel she starts by writing what she calls “a shitty first draft” – in other words, a rough draft that she later revises. And luckily for her, Julie loves revision. “It’s my chance to take something that is messy and chaotic and shape it to what I want it to be,” she told us.

At that point Julie announced that she was going to give us all “the tools to put you in the driving seat.” And, she added, “it involves Post-its.”

But first of all, Julie had firm instructions about what writers everywhere should do when they’ve finished the first draft of their novel:

2: Make a list of your revision points. It takes Julie six to eight months to write a first draft – “and by the time I’ve finished I know what it is I’m trying to say.”

3: Leave your manuscript for several days at least.

5: Ask for honest feedback (“but only if you’re ready and you’ve found someone whose instincts you trust”).

6: Cry. “If you get feedback that is very tough you totally have my permission to cry or whine or hit things or binge on chocolate or go for a very hard run.”

7: Don’t whinge about your feedback on social media.

8: Once you’ve licked your wounds sit back and think “what constructive feedback can I take from this?”

Then it’s time to get cracking on revisions, which, Julie reckoned, should be divided into macro (whole text) revisions and micro (page or sentence) revisions.

Macro revisions might involve story structure, characters, plotting, pacing (beware “the sagging middle”), the beginning and ending (they should reflect each other) and consistency and continuity (is there a logical progression of events all the way through?)

We were all scribbling like mad by now but this was where Julie’s workshop got even better (and it was pretty amazing already). Why? Because she offered a load of ideas that I reckon every writer would find useful.

The first is to use a calendar to plot your timeline and plot – “it can help with consistency and pacing.”

The second is to look at your novel in the abstract by creating “a Post-it plan.” Julie suggested sticking Post-it notes to a wall, table or piece of paper to map out your novel. You can show the high points by raising them slightly higher than the rest and the low points by placing them slightly lower. Having a visual aid like this means that “you might notice if the plot has a strange structure. It’s like a diagnostic tool and it’s the single best revision tool I’ve found.”

When it comes to micro revisions, Julie suggested tightening up prose, cutting repetition, explanation and excessive adjectives and adverbs, reading dialogue out loud (in fact, reading the whole draft out loud) and layering in detail (think about all five senses).

At the end of your rewrite, said Julie, it’s time to pour yourself another glass of champagne. When it came to the end of the workshop though, there was only one thing for it. I legged it to the stationery aisle at Tesco and bought myself a bumper stack of Post-it notes…