Published by Emma Lee-Potter in on Saturday 29th September 2012 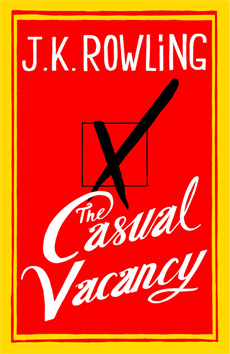 In an interview with The Guardian’s Decca Aitkenhead last weekend, JK Rowling said: “I just needed to write this book. I like it a lot, I’m proud of it, and that counts for me.”

Well, I think she’s right to be proud of The Casual Vacancy, and I said as much when I reviewed it for the Daily Expressthis week. Even though Rowling’s first book for adults features “teenage sex, drug addiction, swearing and scenes that would make Harry Potter blush,” I called it “a highly readable morality tale for our times.”

The book’s been out for two days now and everyone I know is desperate to read it. My husband’s visiting my daughter in Paris this weekend and the first thing she asked him to bring from the UK was a prized copy of The Casual Vacancy. “I’m going to stay in all weekend and read it,” she said happily. “I can’t wait.” Her excitement took me back to the old days, when we used to drive to the old Borders shop in Oxford and queue at midnight for each newly published Harry Potter story.

I’ve been stunned by the vitriol that JK Rowling has attracted in some quarters this week. The New York Times’s Michiko Kakutani judged her book to be “willfully banal” and “depressingly clichéd” and said it read like “an odd mash-up of a dark soap opera like Peyton Place.” And writing in the Daily Mail, Jan Moir acidly declared that it was “more than 500 pages of relentless socialist manifesto masquerading as literature crammed down your throat.”

I completely disagree with both of them. The Casual Vacancy isn’t perfect by any means, but it’s a gripping story. I read it in one go, barely glancing up to make a cup of tea or switch the lights on as dusk fell. Yes, the themes are dark, most of the characters are unlikeable and Rowling’s style is workmanlike rather than literary, but she is a brilliant storyteller. There was no way in a million years that I could have stopped reading this book. In my newspaper review I gave it four out of five stars and I stand by every word.