Published by Emma Lee-Potter in on Tuesday 9th October 2012 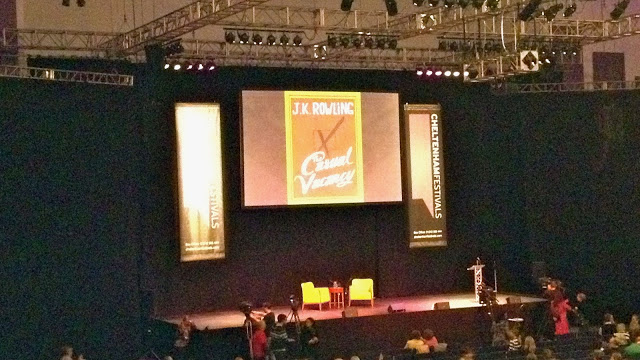 There can’t be many writers capable of filling the cavern-like auditorium at Cheltenham Racecourse – but JK Rowling is one of them.

All 2,000 seats for the Cheltenham Literature Festival event at the weekend had been snapped up in a trice, with people travelling from all over the world to hear their heroine speak. When interviewer James Runcie threw the session open to questions at the end several tearful young fans stood up and said “I love you,” while one woman told her: “I hope you know how many lives you have touched.” “Don’t make me cry,” said Rowling, clearly moved by her words.

A tiny, blonde figure in a chic, black jacket, matching trousers and high heels, she rushed to the side of the stage to accept a letter from one awestruck young girl, crouched down to talk to her for a couple of minutes and gave her a hug.

Along the way she revealed that the next book she publishes will be for children, that Lucy Shepherd, the teacher who taught her A level English, was in the audience that night and that taking part in the London 2012 Olympic opening ceremony was the “proudest moment” of her life.

“I was terrified, absolutely terrified,” she said. “Walking out on to the hillock at the Olympic ceremony was extraordinary. I think I will see it on my deathbed. It was breathtaking and I felt extraordinarily proud to be in it.

“When the huge Voldemort grew up out of the middle of the stage my entire body went cold and I thought ‘how the hell did this happen?’”

Asked about books she read as a teenager she mentioned Catcher in the Rye, To Kill a Mockingbird and Lord of the Flies, while she revealed that the character from children’s literature she most adored was Jo March from Little Women. One book she’d read recently and loved was the Orange prizewinning The Song of Achilles by Madeline Miller.

Asked which of her own books was her favourite she confessed to a three-way split. “I love The Casual Vacancy – it’s what I wanted it to be.” Her favourite Harry Potter title is Deathly Hallows and “then for obvious reasons, Philosopher’s Stone – which changed my life.”

She said she made up stories for her own children but “they are very much tailored to my children. I don’t think they will be appearing in book form.”

At one point she also spoke about her own battle with depression. James Runcie, who described The Casual Vacancy as “Hardy with heroin,” asked her if she would ever write a comedy.

“I think this book is comic in places but the humour gets a little dark,” she replied. “I do have a tendency to walk on the dark side sometimes. I have suffered from depression. I know how that feels and I probably have an innate inclination that way. Writing is necessary to me and does help with that.”

At the end of the evening the queue for JK Rowling to sign copies of The Casual Vacancy stretched down the stairs and right round the building. She’d agreed to sign one book per ticket holder and people stood patiently, clutching their copies of the book and waiting their turn. Goodness knows what time they all got home.