In tribute to Sue Townsend

Published by Emma Lee-Potter in on Friday 11th April 2014 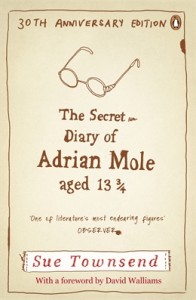 Sue Townsend’s hilarious, insightful Adrian Mole stories are classics. Her razor-sharp wit and astute observations probably summed up the Eighties better than anyone else and there’s no doubt that her books will be read as avidly by future generations as they have been by ours.

Like her legions of fans, I was saddened to hear the news of her death last night. I’m re-running this post from an interview she gave in March 2013 – in tribute to a truly original writer.

Sue Townsend doesn’t give many interviews so I was determined not to miss her appearance at the Oxford Literary Festival.

She’s 66 now, registered blind, confined to a wheelchair and suffered a stroke at Christmas. But for a whole glorious hour, her anecdotes about her childhood, her work and how she came to write her Adrian Mole books made the audience at the Sheldonian Theatre rock with laughter.

She was a late reader and only learned to read when she was off school for three weeks with mumps at the age of eight. Her mother went to a “rummage sale” and came home with a pile of Just William books.

“It was like a treasure trove,” said Townsend. She tore through Richmal Crompton’s stories and then started reading everything she could lay her hands on, from her parents’ library books (mostly about Hollywood film stars and the Second World War) to the classics. She couldn’t, however, “get on with Jane Austen,” and never has. “They are a bit too arch for me,” she confided.

Townsend, who has written 14 novels, revealed that she thinks there will be two more Adrian Mole stories – “at a push.”

Her editor was in the audience and could have been speaking for all of us when she beamed and said she was “waiting with baited breath.”

Townsend also explained that she doesn’t plan her books out in advance.

“I like the way that really good stories or really good scenes come from a tiny bit of dialogue that someone has said. I don’t think I’d like it if I planned it out. I prefer to get as near to life as possible. None of us know what is going to happen from one day to the next. Anything could happen.”

A member of the audience asked if Townsend had any advice for her 13-year-old niece, a would-be writer whom she’d brought along to the talk.

“Do you keep a diary?” asked Townsend.

“No,” said the teenager.

“I think you are very wise,” said Townsend. “Unless you have got a safe place where nobody can find it. They are dangerous things, diaries. They are like bombs, ticking away…”